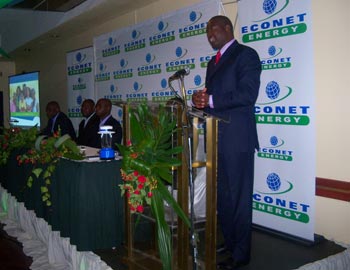 We attended the launch of Econet Energy, a renewable energy initiative by Econet yesterday. Through the initiative Econet is making a move into solar energy in a bid to guarantee always-available power supply to its telecommunications infrastructure and subscribers.

At the event the Econet Wireless Zimbabwe CEO, Douglas Mboweni, delivered a speech in which he explained the reasons behind the strategic positioning in renewable energy by Zimbabwe’s largest telecommunications firm:

We have a fleet of more than 600 generators for our base stations and that calls for massive investment but it also means we have to chew up a lot of fuel…it also means we have to invest in the logistics, the people, the trucks to drive around country basically refueling the base stations, and that’s a major challenge…And as we looked at this we said, hang on guys, this cannot be sustained.

We started looking for a solution from the traditional suppliers of energy and we concluded that it would be unwise to put our investment at the mercy of a third party, whose performance we cannot guarantee.

Listening to the Econet CEO, you could see in as far as power is concerned, Econet is responding proactively to the needs of the environment. This is what Zimbabwe and the wider Africa needs; technology touching the lives of ordinary people directly and meaningfully. Anybody reading this in Africa can easily relate to the immediate benefits to come from such an initiative if driven successfully.

The availability of power is central to the development of information communication technologies in any economy. Indeed, a critical issue holding back the adoption of new technologies (and the benefits they accrue) is the lack of both power to support the infrastructure and that to power end user gadgets.

Below are a few photos we took at the event: