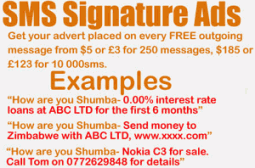 How would you like using the internet to send free SMSs that have adverts appended? Something like “How are you Sumba? – Send money to Zimbabwe with ABC Zim Ltd,www.abczimltd.com”. Really, we would love to know, please comment below. In the meantime, here’s more about the this new service.

The service is called Free SMS Zimbabwe and is available on www.text.co.zw. It has been launched by a Zim startup based in the UK. They have offices in Harare as well. As far as we can tell, the founder is Pearson Pfavayi who is also involved with a UK based hosting company called Zimhosts.com. Pearson Pfavayi does web and hosting work for popular news site NewZimbabwe.com which first covered his new project 2 days ago.

Yesterday, we received a Press Release (download) from the company. The service basically allows users a maximum of 10 text message a day. The messages are free and in exchange Free SMS Zimbabwe appends an advert to the SMS. Users can send the messages from any web enabled device.

The concept itself is not new. I remember using a similar service on www.sms.co.zw (now defunct) back in 2006. Zimbabwe’s total internet users then were well below a million so this sure is a different case.

While internet penetration has improved to allow more people access to such a service, the improved penetration has also meant more access to internet chat services like Facebook Chat and instant messaging aggerators like Nimbuzz , eBuddy and MXit, which basically combine all internet instant messaging services into one neat chatting package. These reduce the success chances of Free SMS Zimbabwe greatly.

The other issue is this; one of the most Googled terms referring visitors to Techzim is Econet’s “eTXT”. The reason is that Econet has been promoting this service a lot since it launched in March this year, and we have a couple of articles on it. The title of one of the articles we did on eTXT sums up our opinion on it: “Econet launches eTXT, erases line between SMS and the Internet”. On this one, free SMS Zimbabwe has basically come to the party a little too late on this one.

Free SMS Zim offers other SMS based services as well, including bulk SMS.

14 thoughts on “Free SMS Zimbabwe launches. Our brief take on it”