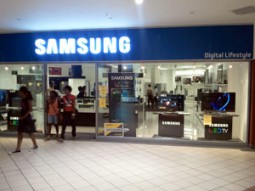 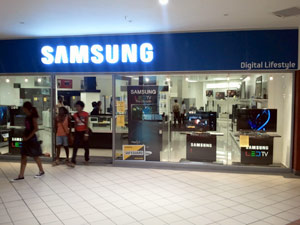 Joina City has freshened up Harare’s shopping scene; it’s good to note that top notch brands like Samsung have landed to serve the local market. Samsung’s aggressive foray into Africa is well documented as it is charging across the continent to address markets that other prominent brands are foolishly ignoring.  Football fanatics (albeit Chelsea F.C fans) should vividly remember the brand’s ads that show up before particular matches, featuring three African master- players. Rather than focusing on the obvious popularity of football as a marketing vehicle, such ads show a perceived respect for African consumers by the brand. It’s only few tech brands that have designed ads specifically for the African market on a continental scale…

We checked out the Samsung concept store at Joina this week. Entering the gadget laden trove we were received by a young sales team that was lively and knowledgeable of the products they were selling. The store is a fusion of white label appliances, entertainment equipment and ICT gadgets. For the sake of relevance our prime focus was on the ICT side of which we found much to gaze upon. 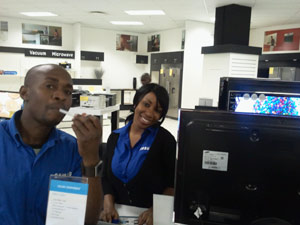 For mobile phone fanatics the store offers a range of phones from basic call and SMS enablers to sophisticated smart phones. Expect to find trending models like the Genoa, Galaxy S, Omnia and the Google Nexus S among others. General pricing of the phones was on the upper end of the scale though, for example the Galaxy S i9000 was hedged at US$899 yet a snap survey revealed a market price of between $575 and $700. On the red hot tablet front; Samsung’s Galaxy Tab-an android major-is going for US$1,100. MM Cell link has the Galaxy Tab going at US$740 with free delivery within Harare.

The laptop range was limited to two models with the entry price beginning at $650 for the RV510, this is a gallop ahead of the $550 OK Mart (formerly Makro) is charging for the same model. On the other end of the spectrum, the R540 is hedged at $1,199. The store’s pricing was quite favourable in comparison with local pricing for similar products from competitor brands.

The store only had laser printers available with prices ranging from $259 for a black one, up to $450 for a multi function colour option. Replacement Cartridges are fully available at a blanket price of $100. According to a staffer at the store, they receive new product releases within reach of the South African market as stock arrives from the brand’s mother warehouse there. All products come with a one year warranty; a warranty centre in Graniteside makes this more interesting. While one can hop to Asia or Dubai to by such products, local support has always been a headache when your treasured gizmo starts acting up.

Conclusively the official Samsung Store is a welcome arrival to Zimbabwe as this shows confidence in the market, however justice can be done to the brand by adjusting some of the prices in line with market trends.  Perhaps the location (Joina City) is the culprit where pricing is concerned. It was also surprising to note that the store has been open since November 2010 as we are quite sure a lot of people are not aware of this. While ads have been appearing in the print media for a while, they do not emphasise the fact that the outlet is an official franchise store.

We gather the brand is set to open another store in Borrowdale soon.

Here’s a shot of the Galaxy Tab and Nexus S: 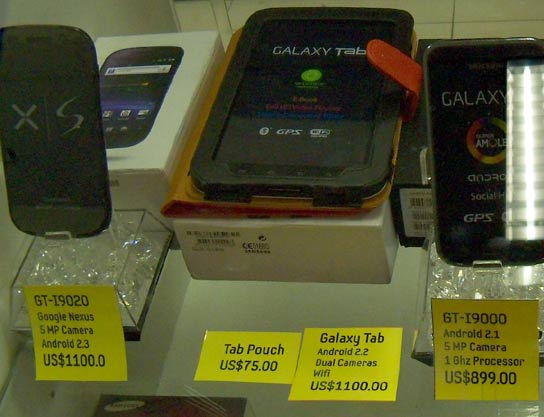