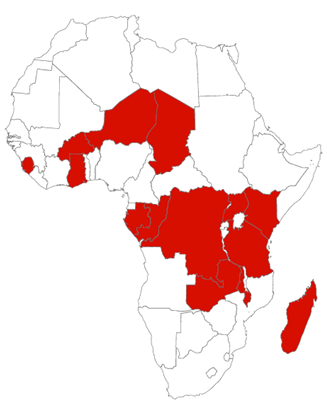 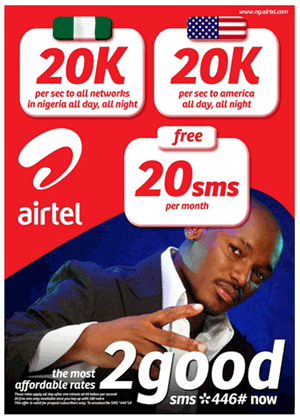 The company’s African assets were acquired from the Kuwaiti based Zain Group at a cash valuation of US$ 10.7 Billion. The company sees Africa as the next growth engine of the world, essentially another India waiting to happen. It has invested heavily in infrastructure and branding as the former Zain Africa was on a decline path in Africa. It is the market leader in 10 of the 16 African nations it operates in and second in 5. Its growth trajectory is built on brand and market consolidation and it competes fiercely on pricing. In what has been dubbed as the price wars, the company has moved into markets like Nigeria by slashing its average pricing by up to 60%. Airtel’s cost efficiencies and consolidated group structure enable it to provide African consumers with services at rates that few can match.

Its key differentiator from other operators in India and Africa is that it is not only a mobile operator but a fully integrated telecoms player. It provides Wireless (2G-3G), Telemedia (Broadband and IPTV), Enterprise Services, Passive Infrastructure Services, and a very interesting DTH package (Satellite TV). Techzim believes that Airtel DTH will challenge DSTV’s continental monopoly in the near future. Unlike the brave few before it, this company has the scale, knowledge and expertise to role out a mass onslaught in this regard. 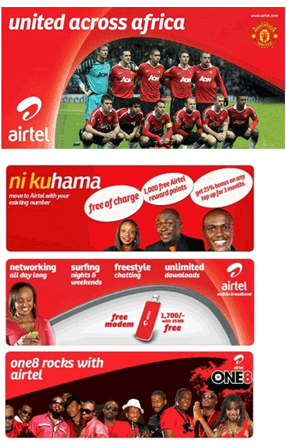 Airtel is positioning its brand across the continent as being youthful, passionate and positive.  The company’s challenge in this regard is the series of names consumers have had to contend with (Celtel then Zain, and now Airtel). Massive investments into building the brand have been made with aggressive promotions and pricing complementing these. The feel free promotion spearheaded the rebranding effort as it sort to connect with consumers. High profile marketing efforts such as the sponsorship of the MTV Africa Music Awards and the launch of the One8 super group have played a key role in raising brand awareness among young and influential markets. One 8 is an Airtel sponsored music group led by R-Kelly and artists from 8 African nations in which the company operates.

The company is also leveraging on its sponsorship of Manchester United to promote its brand across its operating markets. One of their promotions with Manchester United enables subscribers to win a trip to Old Trafford to train with the team. In keeping with its focus on connecting with consumers Airtel also provides sponsorship in other areas such as cultural, music and developmental initiatives.

Airtel’s technical competencies are built on a holistic foundation. It outsources non core network functions to technical partners like Ericsson, Alcatel Lucent, Huawei and IBM to concentrate on growing and managing its networks. It also seeks to partner with value added service providers across all its markets to provide premium sms, ringtones and multimedia messaging services. The Airtel Africa unit stands to benefit from the Indian parent’s very large critical mass as it benefits from economies of scale when negotiating deals.

The company (through Celtel) was a world first pioneer when it launched its ambitious One Network project. The project enables African consumers to travel to various countries (mainly on its networks) and simply buy local airtime while being able to receive calls from their home country at no extra cost. The company is stepping up its technical capabilities in Africa through an exchange programme in which employees in India and Africa are exposed to both markets.

Fayaz is a holder of an MBA (University of Zimbabwe) and a Chartered Institute of Marketing diploma (University of Zimbabwe). Fayaz began his career as a management trainee in Zimbabwe under Lever Brothers (now known as Unilever), he then rose to become a brand manager at the company and its marketing manager. He went on to become a Business Group Head thereafter. Fayaz then joined Innscor as its group Marketing Director in Zimbabwe and operated three businesses after this. His tenure at Airtel Africa began when it was still known as Celtel where he worked as the Marketing Director for Uganda. After this he became the General Manager for Lagos and North Central Nigeria. When the Kuwaiti based Zain group bought out Celtel, Fayaz was seconded to Malawi where he served as the company’s CEO.

His experience spans the whole of Sub Saharan Africa and would be the best leader if Airtel were to make an entrance into the Zimbabwean market. Over and above this, Fayaz can make a significant contribution towards the realignment efforts of the local ICT sector through his wealth of experience.

James is a holds a Bachelor of Science in Computer Science and Mathematics, an ACCA Certified Diploma in Accounting & Finance. He also holds an MBA. Prior to joining Airtel (then Zain), James was the Head of IT at African Banking Corporation (now BancABC) and the Group IT and Operations Director at Interfin Merchant Bank (now Interfin Bank). He has over 19 years worth of telecom, banking and information technology experience. According to his Airtel Zambia profile, he was responsible for laying the blueprint of an efficient and robust IT and back office infrastructure at Interfin.

James has the experience and the passion for ICT to be able to make a meaningful contribution locally. He is another Zimbabwean that could return should Airtel setup shop locally.

*Thanks to Charles Garanganga, one of our readers for giving us the heads up on these two gentlemen.

Sunil is one of the most accomplished entrepreneurs on the Indian sub-continent today. He built Bharti Airtel from scratch to conquer the nation as its leading operator. His accomplishments to date include (in random order): 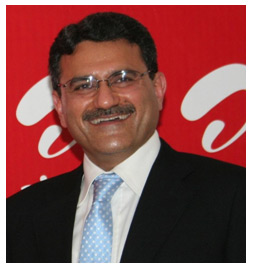 Manoj is the CEO of the Airtel International Business Group (Airtel Africa). The Airtel IBG is the actual name of its Africa operations which he runs from Airtel Africa’s Nairobi base in Kenya.

He has also accomplished the following:

Andre Beyers-A South African is the Chief Marketing Officer of Airtel Africa. He has overseen the challenges of positioning the brand across 16 diverse African markets.

He is the chief architect of the Airtel brand strategy and says that “cellular is in his veins.”  According to his Airtel profile, his goal is to make Airtel the most loved brand in Africa by 2015 through meeting the emerging needs of customers with innovative, affordable and relevant solutions and connecting customers emotionally with the brand.

Andre previously led Vodacom’s marketing department for seven years including brand and retail strategy and customer segmentation across Africa and he set-up the initial marketing frameworks in Mozambique, Congo, DRC, Tanzania and Lesotho. Prior to that Andre was at FCB, South Africa’s largest advertising group at the time, where he spent four years supporting Vodacom’s Innovation Hub – a unit within the ad agency that was tasked with conceiving fresh ideas for the company.

Airtel has not only replicated its Indian CSR culture but responded to the different needs of the African continent. The company has focused on education as its main area of investment by launching adopt-a-school projects across its operating markets. The company also works with organisations like the Red Cross to address the varying needs of societies. In Kenya alone the company has partnered with the Red Cross to help 25 000 school children from over 250 schools with food donations to schools. East Africa is currently facing one of the worst droughts in its history. 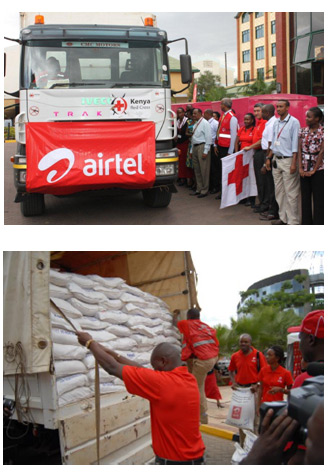 The company believes that the role of education in eradicating poverty cannot be overstated.  According to it, receiving an education is perhaps a child’s biggest barrier to escaping poverty. On this note it works with Ministries of Education across its 16 markets to improve.

It also believes that the power of an education continues to provide benefits to subsequent generations as educated adults tend to marry later in life, have healthier children, be more productive at work, receive better pay in the workplace and generally enjoy greater health.

Furthermore it believe that in Africa It is common for rural youth – especially girls – to drop out or be forced to travel far away from their homes in order to attend school.  The majority of existing schools – especially in rural areas – are overcrowded, poorly furnished and under-resourced.  Historically, in Africa, education has only been available in the cities and larger towns and there’s still a long way to go before that imbalance is redressed. Airtel’s Adopt-A-School project is building on similar experiences in India as it seeks to transform lives.

Techzim would like to thank Michael Okwiri (Airtel Africa’s Communications Manager) for availing his time during the compilation of this profile.