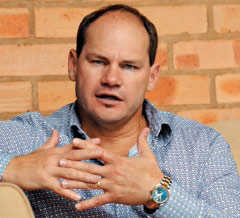 No sooner had we posted the news about the interim order the high court issued against Econet yesterday, than we got a press release from Trustco on the issue. The press release has a celebratory tone and seeks to assure shareholders that the mess in Zim has cleared up.

We have written to Econet, to get their comment on the issue and until Econet speaks on this, it’s hard to say with any measure of certainty what will be happening with Ecolife in the coming weeks.

Here is the full text of the release from Trustco:

Trustco Mobile’s operation in Zimbabwe will be back on track soon, following an interim order handed down yesterday by the High Court of Zimbabwe against Econet, a company incorporated in Zimbabwe.

Trustco Mobile is a wholly owned subsidiary of Trustco Group Holdings Limited. The latter is listed on the Namibian Stock Exchange and was the first company to list on the Africa Board of the JSE.

Trustco Mobile entered into an agreement with Econet and First Mutual Life Assurance Company in Zimbabwe for a fixed period of 18 months in terms whereof Econet Mobile subscribers in Zimbabawe were afforded free life insurance through a product called ‘Ecolife’.

An unfortunate dispute arose regarding the non payment of royalties and insurance premiums by Econet. Consequently Econet was placed on terms to effect payment and the matter was referred to Trustco’s legal advisors to institute proceedings on an urgent basis against Econet.

On Monday, 25 July 2011 the High Court of Zimbabwe handed down the following interim order against Econet:

“1.       The first respondent (Econet) is directed to restore to the first applicant (Trustco Mobile) the internet based reporting links and all access to Trustco Mobile hardware and software, thus enabling it to monitor and process airtime purchase transactions and otherwise perform its obligations in terms of the agreement; and

2.         The first respondent (Econet) be directed to refrain from undertaking and implementing a competing, infringing service to that provided by the first applicant (Trustco Mobile) in terms of the agreement.”

Group Managing Director of Trustco, Quinton Van Rooyen says he is both pleased and impressed with the way the matter was dealt with by the High Court in Zimbabwe. “We are delighted with the ruling and foresee that none of the almost two million subscribers to ‘Ecolife’ will loose any of their accumulated life cover.”

Trustco Mobile, a world first, was launched by Trustco in June 2008. Patented internationally and valid for anyone aged 16-60, this exciting and innovative concept provides free life cover for mobile phone subscribers upon the purchase of airtime from mobile operator partners.

Van Rooyen says it is anticipated that Trustco Mobile’s venture in Zimbabwe will continue for the benefit of all parties concerned. “We have successfully implemented this product in Namibia and Zimbabwe and look forward to introducing this exciting concept to other emerging high growth markets in Africa.”