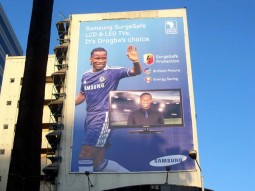 Whether you’re watching ZBC or SuperSport, the message is the same. Samsung, the Korean consumer electronics and white label goods giant is on a mission to become the top electronics brand across Africa. From the towering Ivorian colossus that is Chelsea’s Didier Drogba to positive images of young  Africans marketing their products, Samsung is paying attention to the needs of the world’s last frontier.

Beyond throwing money at ad campaigns and directing shiploads of its goods towards Africa, this in my opinion is the ONLY company in its segment that has studied its market from A to Z. Which other brand is going as far as setting up concept stores across Africa? I am convinced that within the next decade its foray into a complex continent will be the subject of MBA case studies. This is a company local telecoms players, web startups, investors and the likes can learn a lot from.

To begin with when entering a given market, it is immensely important to understand the realities of the place in question. This is rarely obtained from reading economic projections and the latest journals the world’s top thinktanks publish from time to time. Getting a balanced view of what’s really happening on ground sounds very obvious but strangely disappears from the to do lists of even the world’s top brands. For the Korean Chaebol that is Samsung, the first thrust to developing its Africa operations (beyond distributing products) was launching an R&D (Research & Development)  centre in Nairobi, Kenya. This facility is dedicated to understanding or exploring the needs of the continent.

In Africa, Samsung soon discovered that the biggest challenge for its prospective consumers is the availability of power. In keeping with its Built for Africa strategy, Samsung set out to tackle this reality by developing built in surge protectors into its products specifically for Africa. The company has set itself up to win over consumers by  manufacturering LCD screens to fridges, microwaves and other household goods that can withstand power surges toasting similar products from other brands. The company is following this up with a fully functional solar powered laptop that it launched in Kenya as a pioneer market worldwide. 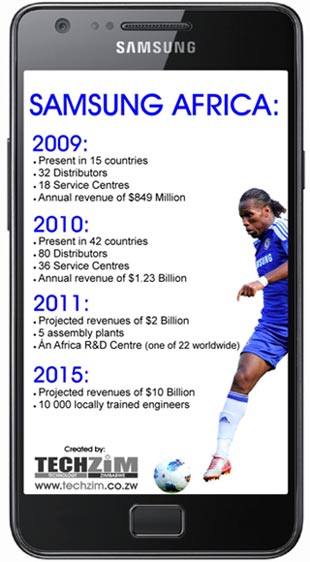 Where mobile phones are concerned, the company is one of a few top tier brands to sell dual sim phones. In its branding and communications it stands out as probably the only brand in its segment to roll out an Africa centric branding campaign. By this I mean everything right down to the smallest detail in its ads is done with a consistent reflection of its mission and understanding of Africa.

Most big brands use foregin marketing collateral to push their products locally. Samsung is smart enough to understand the fact that humans naturally connect with content their are familiar with. In South Africa it even has phones branded with local names like the dual sim Samsung Lesedi (Tswana for Light).

Like China in the early 90s, Africa is on the cusp of a great revolution. Most countries are no longer plagued by turmoil, opening up to growing investments and propelling the emergence of an attractive consumer base. This consumer base is hungry to better their lives and benefit from the power of technology. The fact that Samsung’s annual earnings continentally were US$ 1 billion is not as impressive as the fact that its 2015 target is US$ 10 billion. Samsung is very well positioned to become the electronics king of Africa.