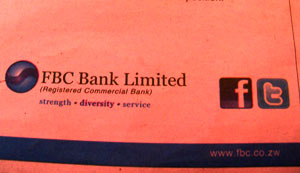 You’ve probably seen it yourself a couple of times; a company (big often) slaps a Facebook badge on its website and print adverts despite the fact that their Facebook page has no activity at all on it. Sometimes the page doesn’t even exist. It’s nothing but a statement to their visitors: We’re moving with the times!

Take the FBC Bank print advert in a recent copy of the Fingaz for example. It proudly spots a Facebook and Twitter badge. There does exist what we think is the FBC Bank Facebook page, but it doesn’t have any posts. The Twitter account exists as well but it hasn’t tweeted even once. 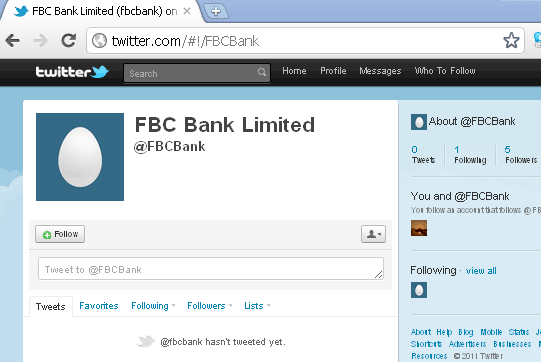 There are more examples. You just need to be a little observant to see them.

It’s clear the badges were not part of a social media strategy. They were just slapped on there because, well, everyone is doing it.

Social media platforms are indeed the in thing on the internet. They offer effective marketing opportunities for business. They’re a great source for feedback and engagement with customers. But there has to be a strategy behind any social media effort and that strategy doesn’t start with slapping badges on adverts and websites.

Local companies don’t need see this as something they need to do themselves inhouse. There are a couple of web development and design houses locally that can help them with their social media strategy.

They can even observe the few local companies that are learning to do it right and doing reasonably well at it. And there a couple; Telecel for example recently launched an official Facebook page that’s being updated consistently. There’s also a social media guy that’s been running an unofficial Telecel page on Facebook for a while now.  ZOL too has some active Facebook and Twitter presence. G-Tide Zimbabwe is another example. Zimpapers is also quietly timely with news updates on their Facebook page. Econet has run a well-executed Facebook campaign. They also have an active Facebook support group and 3G Facebook page.

I’m sure there are more examples of well executed social media campaigns and well run pages by local companies out there. If you know any we didn’t include here, please share in the comments below.