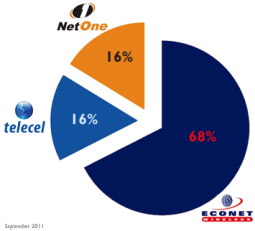 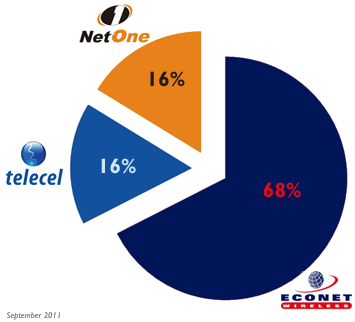 Dollar for  three are the buzzwords for Telecel customers, which refers to Telecel’s popular mega-juice airtime top-up card which costs $1 but offers $3 worth of value, i.e. $1 allowing off-net calls, $1 bonus for on-net calls and a $1 data bundle worth 10MB. Tariff wise, Telecel offers a $0.23 rate across all networks. Compare this  to the $0.23-0.25 depending on call destination by the other mobile operators.

Even for international calls, the $0.25 per minute Telecel charges easily beats the rates offered by the other two; NetOne charges an extortionate $0.41. Given such a scenario and the fact that most Zimbabweans are very price elastic, it should be an absolute no-brainer where most customers should be or migrating to.

Though Telecel’s promotion has been around for a while now, the lack of counter moves by other networks suggests that the number of customers switching to Telecel is too small to bother them. Or, possibly, they have been able to somehow reduce defection by high-quality or most customers.

In highly competitive mobile and cellular telecommunications markets such as in SA, UK, India, USA or even Botswana, where consumers have few barriers to switching carriers, churn is a major issue.

Questions thus arise: why are customers not moving to the obviously cheaper network offering seemingly more value for money? Why does Telecel not make much noise about their promotion? Will an influx of customers possibly deteriorate their service and so they are content keeping the customers they already have and maybe grow a bit more?  is the Telecel service so second-rate (just like other $1 for plenty offers that we know) to the extent it offsets that promotion? Why are Econet and NetOne not responding, seemingly choosing to remain lax about the apparent competition?

Simplistic deductions would point to a lack of effective advertising by Telecel and hence lack/inadequate knowledge of promotions by consumers, especially as witnessed in older age groups and consumers not in major urban areas. Another assumption could be the general view that Econet services are better than all the other networks, i.e. their coverage is undisputedly tops and that on other services (broadband) they are probably miles ahead.  Or maybe is the current uncertainty on Telecel’s future with regards to its ownership.

On close scrutiny however it is clear that customers generally are quite reluctant to switch operators and resist/fear changing their numbers primarily because of inconveniences associated with a number change. The “this is the number most of my contacts know” excuse is a common one. The increase in the number of subscribers with two lines especially new Telecel bears witness to this.

Mobile number portability (MNP) then is probably the solution. This will allow customers to change their network without having to lose their old mobile number. I believe mobile number portability (MNP) is long overdue and the telecoms regulator, POTRAZ, should act in view of that. MNP will protect the rights of the consumers instead of indirectly protecting operators as is the situation currently. It will usher in the much needed freedom and choice for customers with regards to network selection and ultimately breathe fresh and exciting air into the telecommunications sector as mobile operators jostle for customers with new innovative ideas, promotions and services.

After the introduction of the system in some markets in developed countries, mobile operators registered initial average monthly number ports of between 1-20% . In Zimbabwe however considering some services/lack of them by our networks, these numbers and impact should definitely be interesting.

Though the major aim of MNP can be mentioned as stimulating the competition, it should be noted that the average monthly usage by customers increased consistently in many countries after the introduction of MNP probably as customers realized benefits of better services and operators increased the service variations with more suitable prices to keep the present consumers.

We had a discussion with friend at POTRAZ some time ago about the issue. He mentioned that even though MNP is one of most requested services its implementation in some markets didn’t result in mass migration of subscribers from one operator to competing ones. Subscribers just didn’t move in droves as was expected. True as that may be, a key objective of MNP is that it helps facilitate the process of transition of the natural monopolistic character in the sector to competition thus as MNP is introduced, the larger operators will quickly fix their game so they become more competitive and that therefore means MNP’s advantages even if people don’t move are felt in the market.

Imperatively if our networks are really sincere in offering best services to consumers, MNP should help accurately gauge how customers view a network’s service and whether their customers are there by choice or by virtue of that network being the first SIM card they bought, which, sadly, may be the case. Most progressive countries which we all feel our standards should match if not better implemented MNP some years back:  SA (2006), Nigeria(2007), Europe, most parts by (2005), whilst others such as Egypt(2008) and Kenya (2011) have just recently done so.

POTRAZ therefore as custodian of subscriber rights and facilitator of the process of transition from monopoly to competition in the telecommunications market should put in place appropriate regulation that sets this up, where the mobile networks can team for implementation and management of the system.  And if they take their sweet time to implement, like they did for per-second billing, an independent company can be awarded the tender as has been done in some countries.

Through MNP, changing a network should take minimal time; ideally less than a few hours. More than a single day would be unacceptable as this can be a significant deterrent to its uptake. And YES, the service should be of insignificant cost to the subscribers else any of the aforesaid gains will be reversed; we all know the tricks mobile operators get up to when they declare they have done us all a favour in “bringing a new innovative service” to the market.

10 thoughts on “Stimulating competition in telecoms with Mobile Number Portability”