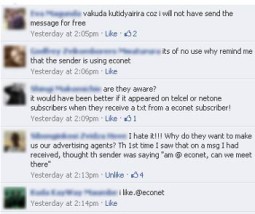 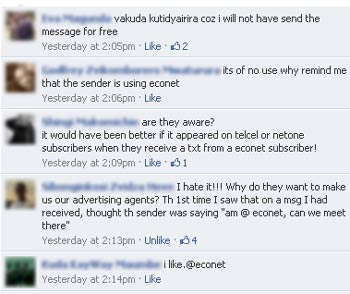 Starting last week, Econet has been appending the name of the company to some SMS messages sent from the network. It reads “@ Econet Wireless”.  Most people we’ve talked to say they started receiving the ‘labelled’ SMSes last week on Friday.  But that the appended text doesn’t come with every SMS. It’s random.

On Monday5 December, Twitter users started asking us if Econet was going to discount the SMS rate to compensate for the company’s label on outgoing SMSes. of course that’s highly unlikely, but let’s see. Yesterday, the traffic to our Twitter account on the issue increased, and now people were expressing annoyance.

So, we decided to ask users on our Facebook page: “What do you think about the ‘@Econet Wireless’ text that is coming appended at the end of some SMS messages sent from Econet numbers?”

We got about 35 responses with most of them subscribers expressing dissatisfaction. Some were outright rude and went to the extent of cursing (which by the way we just remove). There were a few people though that don’t mind the ‘@Econet Wireless’ label on their SMS messages. And some just threw in some ideas for Econet. Here are a few:

‎@least they should let people opt in or out

Used to see these when a message is sent using one of those free web SMS tools. Thought the person sending me the sms was using some new Econet SMS tool or something. Do we even know why they are doing it? Part of some campaign, maybe? Would be interesting to know.

Maybe as free emergency texts, like 5 free per day per subscriber or something. For money, unbranded is the only acceptable option

The purpose of the labels, Econet says, is not promotional at all. It’s some kind of fighting SMS messages accessing the network illegally they say. At least that’s what we understood from this response an Econet representative provided on the company’s Facebook group wall:

We are working on introducing SMS signature which at the moment will be used as a tag to validate authenticity of a short message as being sent by an Econet subscriber.

What about you? You mind the company’s name on your SMS messages? If not, why?