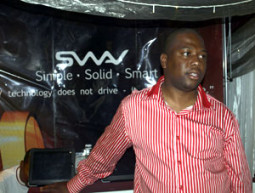 We first read the latest on Swav last week Thursday on a website called IDG ComputerWorld Zambia in an article titled “Zimbabwe’s Swav gaining in African handset market”. Part of the article reads:

Despite the increasing number of imported and highly subsidized Chinese-made mobile handsets, Zimbabwe’s only phone manufacturing company, Swav, is gaining ground in the African market.

Launched in 2010, the company is now exporting to East Africa’s largest telecom markets, Kenya and Nigeria in West Africa, as well as Angola in Southern Africa, with plans under way to expand into several other African countries.

Although the markets in Kenya and Angola are recording limited success, the company is selling about 100,000 handsets in Nigeria every month. Nigeria is Africa’s largest telecom market by investment and subscriptions….

As Swav steps up production, competition in the supply and sale of the handsets is expected to be stiff as the Zambian mobile manufacturing company M-Tel is also targeting the Eastern Western and Southern African markets, including Zimbabwe.

However, both companies are threatened with the influx of Chinese handsets, sold cheaply in many countries in Africa. Efforts by the Zambia government to block the entry of the phones into the Zambian market have so far proved unsuccessful, threatening M-Tel with closure.

Unlike the Zambian government, which increased customs duty on foreign manufactured phones to 15 percent from 5 percent in a bid to encourage local production of phones, the Zimbabwean government has refused to do so.

Good news like this press release travels fast. No sooner had it been published than Zimguardian picked it up and repeated the PR. It’s said if you repeat a lie often enough, people will believe it. Eventually a big local daily newspaper, the NewsDay, picked the lie and amplified it yesterday. But in these connected times we live in there’s high risk repeating a lie; someone will eventually call you out on it.

You dear readers know of course that Swav doesn’t manufacture any mobile phones in Zimbabwe. They, like every low cost phone distributor locally, just import cheap BlackBerry, Nokia, iPhone and iPad imitations from China. Like us, you probably also know that Swav doesn’t need to lie at all about this. They can do fine just emphasizing their low cost imitation strong selling point. Given the choice to buy a US $600 genuine BlackBerry, or get something that looks like it for just $150, the obvious choice for their target market (low income earners) is to knowingly take the Chinese imitation option.

Forget the irony of Swav’s perceived threat, their real threat is not the “the influx of Chinese handsets” as the company thinks; it is the emergence of low cost smartphones and feature phones from reputable global handset manufacturers like Huawei and Samsung.

The whole episode reminds us of Nhava, the low cost netbook ‘manufacturer’. Another case of a company that lied where it didn’t need to.

3 thoughts on “It’s Nhava all over again, only this time the name is Swav”