Zimbabwe has over the years become a predominantly cash society while mobile communication continues to grow and be pivotal to most consumers in the informal sector. We recognise the inherent burdens airtime pre-payment inflicts on consumers.

These were the words of the founder of Lendme.co.zw, Michael Charangwa, when we chatted with him a few days ago about his new startup. His company lends out airtime to users via a web and mobile web interface. Borrowers are given 7 days to pay for the airtime. And here’s the great part; they don’t charge anything for the service. Well, nothing as long as you pay them back for the airtime on time.

So how do they make their money you ask? Lendme basically sells airtime and providing it on credit in a market that’s not so cash rich, might help them move more volumes faster. They already buy airtime electronically from the mobile operators at wholesale rates.

The idea, Charangwa says, came about in January last year when he was in Nyanga, a tourist area in Zimbabwe. He narrates, “I was about to run-out of airtime, however was able to access internet. So really thought how good it would be to access airtime online or on some sort of mobile application. The problem however was people would have to pre-pay an account.” To tackle the airtime problem and also not require anyone to prepay the airtime Charangwa decided he’d create a company to provide the service.

Though available for registration online, Lendme will be launching officially on May 1. Charangwa explains the product has been in beta test for a month with 1,200 participants and during this time says “we have learnt a lot about our market, expectations and dispelled quite a few assumptions.” 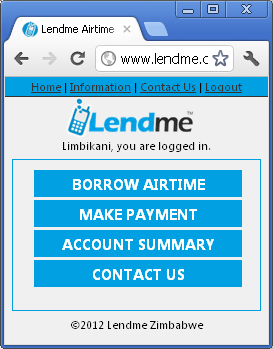 Lendme enters a market where one mobile operator, Telecel, has started offering airtime on credit, and other operators are said to be considering offering the service too. Telecel however requires that you be a subscriber for at least 3 months before they can let you borrow. The Lendme approval process on the other hand takes mere seconds; it’s carried out mainly by computer algorithms which come with a trust rating for new users. The trust rating basically helps the company determine if they can trust the user to pay for their airtime on time. When I registered last week for example, the account was approved immediately and I was able to borrow a dollar’s worth of airtime.

To pay back, subscribers can either the mobile money payment options EcoCash and OneWallet. When they launch Charangwa says they will be accepting payment from of Zimbabwe issued debit cards as well as bank deposits. The team is also working on making the repayment process smoother by integrating it to mobile operators so that subscribers don’t have to do it manually.

But people don’t always pay their debts on time. “We will always provide our customers with an opportunity and time to meet their obligations as set out in our terms of use,” explains Charangwa, “however in the event that one chooses not to repay, we have legal collection options available.” Lendme charges $9 for all airtime not paid by the 22nd date.

While the product’s target location is Zimbabwe, the Lendme team of 7 employees (including Charangwa) operates primarily from an office in the United Kingdom. Charangwa explains that he travels between Zimbabwe and the UK often for business and that the system as a whole requires very little admin locally so there’s not been need so far to establish offices in Zimbabwe.

In future, Lendme plans to expand the Lendme service beyond just lending people airtime. A service called Lendme Money is the pipeline. Charangwa says the team is working on agreements with a local financial institution to launch a service that will allow users to borrow micro amounts up to $100 using the same platform.

What do you think? Will you likely use Lendme?

9 thoughts on “Lendme.co.zw will lend you mobile airtime, at no extra charge”