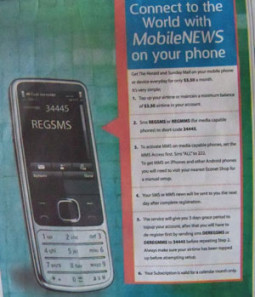 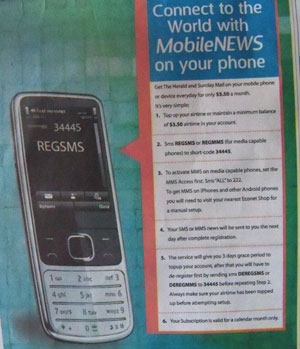 This last month (May) we at Techzim have been using the Herald and Sunday Mail  service known as MobileNEWS and we have not been disappointed by it. The two newspapers are the flagship titles in the Zimpapers stable. Everyday, like clock work, at 6.00am the service has delivered the papers’ headlines to our mobile phone. In the event that a user does not receive the news SMS the product has a feature that allowing you to send a request that initiates the processing of your news SMS, which is subsequently sent. In our experience so far we have not had the need to do this.

In an effort to find out more about the market’s reception of the service Techzim spoke to Munyaradzi Hatendi, the Zimpapers Marketing Manager, who revealed that there has been positive response from the market. So far 5,000 subscribers have signed up for the service in the first month. Given that the service is priced at $3.50/month this represents $17,500.00 in revenue. Obviously this amount is shared with their exclusive partners Econet, the mobile network.

Hatendi noted that although the uptake has been positive they are looking at refining the product and to improve the user experience. One area they have identified relates to airtime balances and recharge amounts. For most subscribers having an airtime balance of $3.50 or more in one instance is a challenge, so for convenience the Herald is introducing a smaller amount payment option. Observations of the market have shown that the majority of phone subscribers top up their accounts with $1 per recharge cycle, so to accommodate this reality the Herald plans to offer customers an option to pay 0.50c. This subscription would be valid for several days which they will officially announce in the early part of June 2012.

Another lesson the newspaper group has learnt is the need to spread the reach of their advertising. To date their service has been advertised exclusively in the Herald but Hatendi noted that the bulk of their target audience resides in the rural Zimbabwe and the chance of these potential subscribers missing the adverts is significant. To address this issue the Herald intends to launch an SMS based advertising campaign designed to inform these potential customers.

Ultimately the media group’s intention is to expand the MobileNEWS service to cover their other titles such as Kwayedza and the Chronicle. This however will depend on the success of the current pilot initiative. 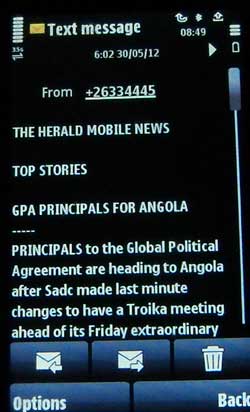 We are yet to see similar services being introduced by the Herald’s major competitors namely Newsday and the Daily News. A similar situation prevails with the country’s major weeklies the Financial Gazette, Independent and The Standard. Trevor Ncube, who owns Alpha Media Holdings the publisher of Newsday, Independent and Standard is an avid user of Twitter and Facebook so it’s surprising to see his titles not innovating on this front.

This scenario suggests that the local newspaper industry does not take the digital opportunities and threats seriously. In today’s technological environment were media is migrating to various digital platforms it is strange there isn’t more experimentation by all players in the newspaper sector.