Feel like hacking away in Harare next week? Here’s an opportunity (Updated) 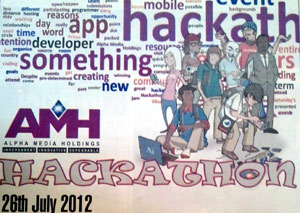 Alpha Media, one of Zimbabwe’s largest media houses has announced that it will be holding a hackathon for developers in Zimbabwe next week (26 July to be exact) at a venue to be advised. The event is expected to attract about 15 individuals or teams of developers to, for 12 hours, hack away and produce some innovative apps.

Not much information is available at the moment in terms of prizes for the winner, the exact problems that developers will work on or the technologies (and APIs) for the hackathon. In our communication with Alpha executives running the event, we were assured that details will be released shortly.

The hackathon, according to the announcement, is part of Alpha Media’s first step in “creating a technology innovation hub in Zimbabwe that will nurture young talent and create entrepreneurs who will help drive the economy”

Here’s the full text of the announcement below. We will be posting any updates to the information as we get it.

Alpha Media Holdings (AMH), publishers of NewsDay, The Standard and the Zimbabwe Independent, will next Thursday hold the first ever hackathon in Zimbabwe, bringing developers from around the country to participate in a digital application development challenge.

A hackathon also known as a hackfest or hack day is an event in which web, software and mobile developers, as well as others in the field of software development, collaborate intensively on software-related projects.

At AMH, apart from reporting news and empowering the public with information, we are passionate about providing thought leadership, innovation and inspiring this great country, AMH chairman Trevor Ncube said.

We are happy when Zimbabweans succeed and are ready to celebrate this success.

The AMH hackathon seeks to provide a platform and space where young and talented Zimbabweans brainstorm, collaborate and compete in innovating for the future.

Technology will play a huge role in Zimbabwes future and we want to help nurture and cultivate that talent for the benefit of us all.

A total of 15 developers, working individually or in teams, are expected to come up with and develop innovative applications (apps) and tools in a limited period of time.

This event will go on for 12 hours and winners will be selected upon completion.

Winners will receive prizes and these new apps may be adapted by AMH to illustrate innovation across its digital platforms.

The AMH Hackathon is the first step in creating a technology innovation hub in Zimbabwe that will nurture young talent and create entrepreneurs who will help drive the economy.

It will also help identify the talent, recognise and encourage its growth and showcase it to the world.
We want to help talented young Zimbabweans build applications to solve the problems that we encounter in business and our daily lives.

The AMH Hackathon will be a space for creativity, collaboration, competition and inspiration, Ncube said.
Companies that have previously held such events are Facebook, Yahoo, BBC and LinkedIn.
New York City State recently held a hackathon for purposes of reinventing its website in April.

Hackathons are an integral part of Facebooks product development process. In a TechCrunch report, founder and Facebook chief executive officer Mark Zuckerberg said: The word hacker has an unfairly negative connotation from being portrayed in the media as people who break into computers, he wrote.

In reality, hacking just means building something quickly or testing the boundaries of what can be done.

Like most things, it can be used for good or bad, but the vast majority of hackers Ive met tend to be idealistic people who want to have a positive impact on the world.

Facebook hackathons are a chance for employees to work on half-baked ideas and turn them into real products that eventually get shipped.

Everything from Facebooks chat system to an early version of Timeline called Memories have come out of hackathons.

We have posted the details of the Hackathon in an event posting on this site. Click here to check them out.