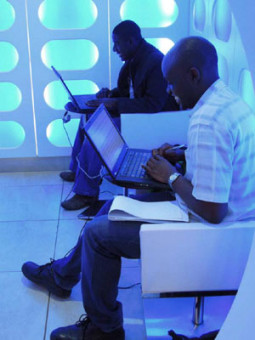 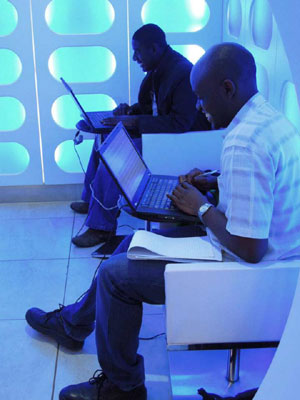 After their success at the FMNA ZeTXT Apps Challenge we caught up with the team behind the winning app mTutor to see how much progress they have made to commercialise their product. mTutor the brainchild of developers Prince Kaguda and Douglas Chifetete was a case of second time lucky as they had participated in last years ZOL Startup Challenge.

Kaguda and Chifetete are not just business partners who share a passion for writing code, but they have strong friendship that has been forged since their high school days at St. Ignatius, a Jesuit run school with a solid reputation for producing top students. Their paths seem to have marched in lockstep since then. Although they attended different universities with Prince attending the National University of Science and Technology (NUST) in Bulawayo and Douglas enrolling at the University of Zimbabwe in Harare. The universities may have been different but their studies where broadly similar with Prince taking up Computer Science and Douglas opting for a degree in Business Studies and Computing Science. The two are also Java Certified programmers and used the java framework in developing mTutor. During the course of their studies they both interned at e-Solutions, a company they joined upon graduating. Since 2007 they have been at e-Solutions with their work focused mainly on e-banking products.

Kaguda and Chifetete participated in last years ZOL Startup Challenge where they entered an application called MobiAid, a product that was similar in many ways to MedAccess which was launched later in 2011 Altfin Medical Aid Scheme. The two may not have achieved a podium finish at the Startup Challenge but invaluable lessons where learned and assimilated. Kaguda notes that the biggest lesson was that they needed to present a polished app to the judges rather than a wireframe. Also a big drawback in their MobiAid presentation was that the commercial side of the business was not fully formed. They had neglected bringing on strategic partners in the form of mobile network(s) and medical aid companies. So although the concept was sound the app and the business model still had a lot of work to be done. A fact which was borne out by that Altfin independently produced a similar product soon after. Atlfin’s product also affirmed the duo’s acumen at spotting opportunity.

When the FMNA Apps Challenge came around, after some intense brainstorming they generated 8 ideas which they felt would have market traction these were quickly whittled to 3 for which they produced prototypes and entered into the competition. Of these 3 mTutor was chosen as a finalist. mTutor may have been chosen for the challenge but ironically they thought it was their second best submission behind Mobifieds a classified sms advertising application. They knew the product was still skeletal and dedicated some serious hours to giving it more form and function, a point which was affirmed by one of the judges comments that the product presented to the finals was far more advanced than what had initially been submitted. mTutor itself was inspired by the fact that Prince’s sister who was writing her ‘O’ level’s last year was faced with a dearth of past exam papers. So initially the idea was to provide past exam questions over sms, but during their research they realised that the advanced maths symbols could not be shown on the phone. So they migrated to looking at developing the application for primary school mathematics. 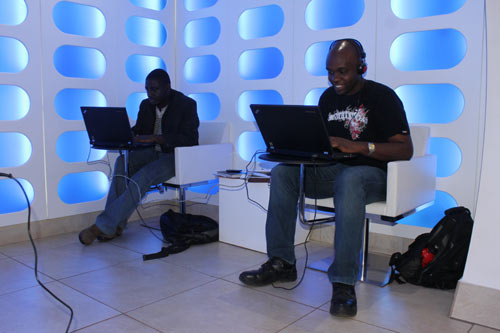 mTutor allows parents and students to request questions by SMS and these questions can be obtained randomly or by topic. The application sends the student questions they have not previously answered. The student can then submit solutions to questions by question number. The will then respond with the solution and they key concepts needed to answer the question. Students then get points for each correctly answered question based on the questions level of difficulty. Students can also share results from their quizzes with friends and peers. Kaguda notes that they are working on some social media integration in this respect with a Facebook feature likely to be the first deployed. This possibility was not lost of the App Challenge judges who valued the virality of ideas as a key success factor. mTutor was developed using Google’s App engine but for scaling purposes will be migrated to Rackspace once deployed with Econet.

Since winning mTutor have presented their product to the Econet Value Added Service’s team and are finalising a product launch and development timeline. Kaguda noted that this alone is a significant development for Zimbabwean developers as previously getting access to the Econet VAS team was virtually impossible and even if one did manage to get approval by the VAS team, it normally took about 8 months to get final approval as the application moved from one department to another. Since mTutor is riding on the FMNA platform which is already approved by Econet the whole approval process is more expedient. This opportunity has also been availed to the other 6 finalists in the FMNA App Challenge. The launch of mTutor has tentatively been set for September 2012.

Kaguda noted that the real work for the team came after winning the App Challenge when they hunkered down to produce a business plan, the project plan and additional research. The team has decided on a subscription business model for the product. Although they are yet to decide on a price point, they are thinking of $1 per month/user. Their research has determined that Zimbabwe has 4.3 million students in the primary and high school system broken down as 2.8 million and 1.5 million respectively.

Other than additional programming, further content development needs to be done, not only with respect to the maths subject matter but also other subjects at primary school level. In due time they also plan on adding high school content. To achieve this they are in discussion with the Ministry of Education, Sport, Arts and Culture to work with curriculum advisors. Once this is completed they are also looking at hiring data capturers to populate the app.

In the aftermath of the Trustco debacle it is heartening to see Econet taking a proactive role in encouraging the local developer ecosystem. Kudos also have to be given to Forgetmenot Africa and Jumpstart in providing developers with a platform to present their work. But most importantly it’s great to see Zimbabwean developers rising to the challenge and creating some great work that deserves a chance in the marketplace. We certainly wish the mTutor team of Prince Kaguda and Douglas Chifetete success with their project because their success will not just be theirs alone but for all Zimbabwean developers.

2 thoughts on “mTutor marches towards commercial launch on Econet network”