So we kept pushing forward an article about how BarCamp Zimbabwe 2012 and the two rounds of the ZOL Jumpstart Challenge went, but we have received enough emails reminding us not everyone had the opportunity to attend and that even those that did may have missed some things. We have of course posted tens of thousands of words on the Jumpstart Facebook page as photos, and on Saturday we announced the 6 startups that made into the finals. We’ve also been updating the startup challenge’s page on the Jumpstart site with the latest lists of startups that progressed through to the finals.

The two day unconference and pitching event started on Thursday predictably quite at a slow pace. The usual showing up at 9 for an 8 AM event. But it picked pace quickly with the facilitator of the event, Atwell Mukusha, kicking of BarCamp with a discussion on the ongoing ICT Policy review that the I CT ministry has embarked on.

There was a lot of talk about devs and young entrepreneurs not being involved in the country’s tech discourse and planning, but the discussion took a much needed turn from the usual complaining; participants noted that tech entrepreneurs and developers themselves need to organise themselves if they are to be taken seriously. An example given were the VAS companies which continue to complain about it taking too long to get a shortcode from mobile operators but still fail to come together as one voice to approach the telecoms regulator and the MNOs as one.

After Mukusha’s opening discussion came a talk by ZimSwitch’s Adam Roscoe.  His talk, titled “Opportunities for m-commerce and e-commerce in Zimbabwe for technology entrepreneurs” was a much awaited one as tech entrepreneurs are keen to learn more and be involved at an early stage in what his company is building.

The great thing about Roscoe’s talk (and the same can be said about the next presenter, Collin Franco) was it helped the audience understand some payment startups with some perspective a few hours later. A question that was asked Roscoe by a number of participant is when devs can expect to hook into ZimSwitch’s platform and the long and short of his answer is that they are working on all necessary tools to interface with developers, (an API, a sandbox etc…) and that devs need to wait at least a month or two to get access. We’re going to post an audio of Roscoe’s talk later today. 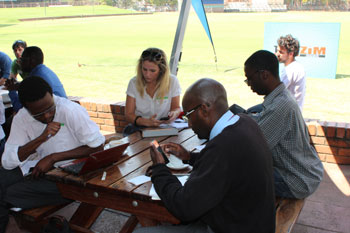 Meanwhile, the guys in charge of the social media live tweeted, instragramed and posted updates to Facebook to keep the wider tech community informed of the proceedings.

Next to present was Utande Chief Technical Officer, Collin Franco, whose talk was titled “Data centres and cloud computing for local tech start-ups”. Collin went on to break down the aspects of cloud computing especially in a local context to help the audience appreciate the opportunities of infrastructure and software as a service. He also took the opportunity to uncover some of the myths around the cost of data access & computing power in a cloud scenario.

One specific item Collin touched on is that though a lot of techies believe and demand that local data access should be cheaper for consumers, this does not make business sense for the internet providers as most of their costs are in setting up and keeping the infrastructure working, as opposed to just transporting data between nodes.

Next up was blogger Larry Kwirirayi, whose talk on Social Media focused on optimising engagement via new media.

Larry’s presentation was followed about an hour long break spent by participants having lunch and getting to know each other. Most discussions I got into with colleagues were centred on Roscoe’s payments presentation, especially concerning how much impact it would have on local e-commerce and m-commerce.

It has been rumoured that Econet is working to build its own internet PayPal like payments system which may (or may not, who knows!) allow merchants to process payments directly without needing third parties like the ZimSwitch platform and it was great spending time speculating about what the next few months hold for Zimbabwe’s internet payments.

After the break, the startup pitches we had all been looking forward to began. A total of 19 startups pitched to the audience. We had a shortlist of 20 tech startups initially (filtered from a total 43 applications) but one of them didn’t show. In addition to it being a competition, the idea of pitching to the whole BarCamp audience is so the startups have an opportunity to announce their product to a big audience and benefit from the feedback and ongoing help that comes from this wide group. In the past, these interactions have led to partnerships, and startups generally attracting talent or being offered services by members of the audience.

On this day, a panel of 3 preliminary judges (myself, brad Searle and Richard Mberi) select 10 startups which then pitch the next day to our ZOL Jumpstart Challenge judges. The selected startups from that day are the following:

After the announcement of the 10 startup above, the program of the day was announced over and as participants trickled out, some stayed behind to discuss more over drinks. 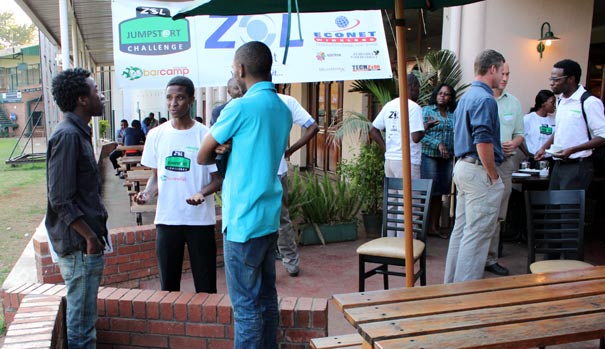 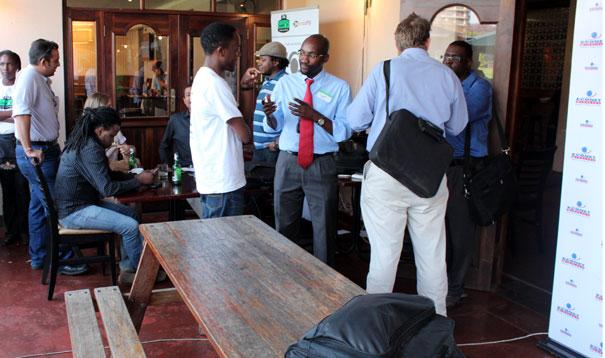 Day 2, Friday, was a startup only event where the shortlisted 10 from the previous day pitched to the ZOL Jumpstart Panel of judges. These guys:

6 startups made it out of this day’s pitching and will be refining their ideas (based on the feedback they got) to pitch at the finals event to be held this Friday. The 6 are; FootballZone, Lost and Found, mTutor, Nimbus, Qurious Consulting and RLMS (Remote Livestock Marketing System).  You can read more about them and check out their pictures here.

We look forward to Friday and we will be posting another update once this year’s winners are announced. Media Matrix sponsored video coverage of the whole startup challenge so look out for some videos after Friday! We’re grateful to everyone that attended the BarCamp and to the sponsors for making it a resounding success again this year!