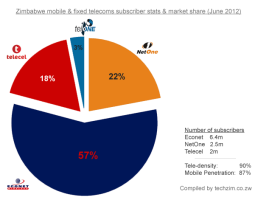 Zimbabwe’s telecommunications regulator, POTRAZ, has released the June 2012 (2nd quarter) mobile phone and fixed line subscribers statistics. The stats, which were published in the state owned daily, The Herald, today, show that Zimbabwe’s tele-density increased from 81.5% in the year’s first quarter to 89.9% in the second quarter. This is a significant jump and is testament to the rapid adoption of mobile phones by Zimbabweans in the past year. Consider that in June 2011, the country’s tele-density was just 56.6%! 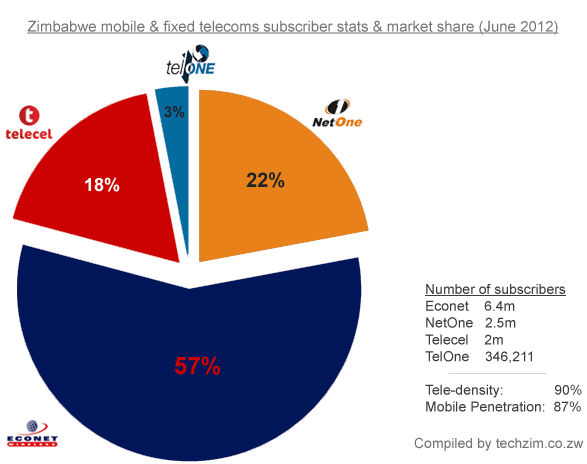 Zimbabwe’s population estimate is 12.5 million, and the mobile penetration according to these figures is therefore 87.2%.

You will notice that in terms of growth, as compared to the March 2012 stats, NetOne grew its subscriber base the most adding a massive 884,342 subscribers. Of the 3 GSM mobile operators, Econet grew the least, only adding 27,788 subscribers. Telecel’s growth was mediocre with just 169,862 subscribers added to their 1,832,778 March 2012 figure. TelOne, worryingly, lost 26,789 subscribers in the period.

The stats reveal that Telecel has, once again (or for the third time depending on who you ask), lost the second position to the state run mobile operator, NetOne.

Econet’s addition of just 27,888 subscribers in 3 months is even more disappointing. According to these stats the company lost 6.2% subscriber market share in that period as it now only accounts for 58.9% of Zimbabwe’s active SIM cards. Down from 65.1% in March 2012. This must be worrying for them as it seems the 2 cents savings on on-net calls that subscribers are likely to make on calls to Econet’s massive subscriber base is not attracting subscribers.

As you may be aware however, both Telecel and Econet announced to the press, their current stats last week. Current here is assumed to be end of August at least. Telecel said it has hit 2.2 million subscribers and Econet claimed 7 million.