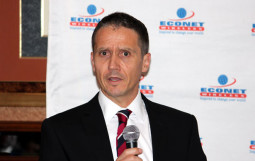 He is a consultant and has over 30 years of international business experience specialising in the telecommunications industry. He is currently the Non-Executive Chairman of Johannesburg Stock Exchange-listed York Timber Holdings Limited.

Dr. Myers has a BA in Mathematics from Texas A&M University, a Master of Arts in Mathematical Physics from the University of Arizona and a Doctor of Philosophy in Industrial Engineering/Operations Research from Texas Tech University.

He first came to prominence in Africa when he led the team that acquired MTN South Africa in the early 1990s on behalf of the giant American company before it later sold it. After that, he led a consortium, which included Malaysia Telecom, that controlled Telkom South Africa for many years.

In a brief statement on the departure of Mr Nyambirai from the board, Econet Wireless founder Mr Strive Masiyiwa said: “‘TawandaNyambirai has done an extraordinary job for us. He led the legal team that fought for the original license in the courts. He has overseen the development of the business ever since I left Zimbabwe 12 years ago. He is a historical companion to me, and I look forward to working even closer with him, in other roles that I have for him.”

On Dr Myers, Mr Masiyiwa said it was a testament of how far the Zimbabwean company has come when it could persuade international businessmen of the calibre of Dr Myers to head its board. He described Dr Myers as “a man of impeccable credentials and integrity who will oversee the next phase of the Zimbabwean business’ development”.