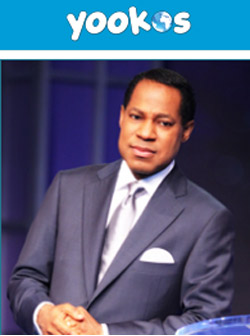 Two days ago I received an SMS advert from Econet inviting me to join Yookos. It read:

I’ve always wanted to join and just check out the network but never got to do it; Facebook, Twitter, Google+, and now biNu all make sure my internet time is oversubscribed, and the little time that’s left is increasing allocated to WhatsApp. But an SMS demands that you attend to it and I yielded. I decided to try it, find people I know in there, contact Yookos to get official information about the network, research on it a bit, and make a post that will make me and you dear reader understand what Yookos is about.

Trying Yookos hasn’t been easy and I would’ve just given up had I not been on a blogging mission. See, when you sign up it says the verification email’s been sent to your mailbox, but doesn’t actually send it until you attempt to login with the unverified account and instruct it to send the email. That was my experience at least; 5 times I tried with 3 different emails.

Inside I didn’t find any friends, but I’ll stick around and wait.

What is Yookos? Where did it come from?

We sent Yookos an email to get this information this and they responded. We post their responses below but first here’s the little information we got just from looking around.

Yookos was founded in 2011 by Chris Oyakhilome the leader of a church organisation called Christ Embassy international. Initially, the social network appears to have been for members of the church and people interested in the organisation and connecting with Oyakhilome as this blog post points out.

In 2012 however there appear to have been a deliberate push to extend the social network’s subscriber base beyond religion. To make it in other words, a secular network competing directly with Facebook and others for any person that just wishes to connect with their friends online. Yookos CEO and Christ Embassy pastor, Tomisin Fashina, is quoted on this Nigeria blog:

We’re proud of our roots, but Yookos is a social network designed to reach out to all Africans, regardless of religion, politics, gender or where one is. This is a meeting place for all Africans to come and be educated, entertained, and interact

That notwithstanding, the sites still has a significantly high amount of religion related content, which we imagine the Christ Embassy users probably love about it.

Indeed the Yookos logo appears alongside the YouTube, Facebook, Twitter and Skype logos almost every time Econet advertises its mobile broadband service, be it billboards, press adverts or on the web. It’s kind of free advertising for the social network, which, clearly, is nowhere near Facebook and the others in terms of uptake locally or globally.

We contacted Econet to understand what this is all about. We didn’t get any response from the official channels but a source tells us the SMS ads are paid for by Yookos. In terms of the relationship between the two companies, our source says Econet doesn’t own a stake and doesn’t have business interests in the startup. The extent of the relationship, according to the source, is that Econet founder and group chairman, Strive Masiyiwa, is a member of Christ Embassy International, a church led by Yookos founder, Chris Oyakhilome. 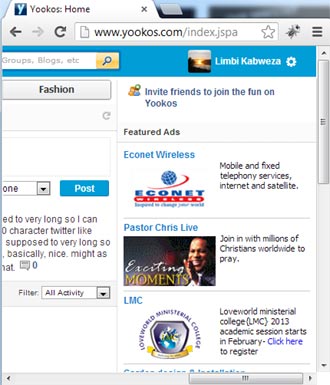 The advertising is not one way; Econet itself also has adverts on Yookos. Yes, like Facebook Yookos is also has an ad driven revenue model. According to the Yookos advertising page, advertisers can target Yookos users “broadly by demographic and geographic preferences or you can get granular by targeting people’s specific likes and interests.”

As mentioned above, we sent some questions to Yookos so they could help us understand better the traction they have had so far, this faith-based -or-not identity confusion, the technology powering the platform, and what they feel about competition from Facebook, Twitter, Mxit, biNu and others. Here’s the full text of the email interview:

When was Yookos founded, by whom and when?

Yookos was initially started by a church community as a platform to share prayer points amongst themselves. Soon after that Yookos’ true potential was realized when millions of people joined and a decision was then made to officially open it up to the rest of the world. In January 2011 Yookos became a social network platform that caters for everyone.

What is the current subscriber base of Yookos currently, both registered users and active ones.

We currently have over 10 million users registered on the platform situated across the world.

Which countries have the most users on the platform (can we have the top 5). Any reasons for high uptake in those countries?

We currently have most of our users accessing the platform from the following top 5 countries: Nigeria, South Africa, United Kingdom, Zimbabwe and USA Much of this uptake is obviously fueled by the accessibility of the internet and in the case of Nigeria the population size is also a key factor.

Initially Yookos was regarded as a Christian social network but more and more now the network is attracting people not affiliated to its Christian organisation (CE). Is there a deliberate push to make Yookos a platform not restricted to Christians only?

We are certainly making a push towards getting everyone on the platform. As a company we are very proud of our Christian roots, but what Yookos is, is a social network designed to reach out to everyone, regardless of religion, politics, gender or where one is. It is a meeting place for everyone to come and share, learn, entertained, and interact with others. We’re hoping to grow significantly in this direction.

We’ve noticed Yookos is advertising on mobile networks via SMS such as on Econet in Zimbabwe. What is the drive behind this advertising campaign. are the similar ones in other countries?

Being a social network that focuses predominantly on Africans within and outside the continent, we understand that more than 50% of our market accesses the internet, especially social media, through mobile devices than on anything else. It is for this reason that we’ve created campaigns that target people where they spend most of their time when surfing the net, the mobile space. In preparation for the release of the latest and much fresher looking version of Yookos later this month, we have lined up a series of similar campaigns to be launched in our top 5 markets around the world.

What technology platform is Yookos based on? Is the software running the social network based on a commercial/open source network/cms or was it built from ground up by Yookos.

Yookos currently runs on the Jive 4.5 platform and will soon be migrating to the Jive 6.0 platform – the latest version of Yookos launching in January 2013, which will bring about significant improvements in the user experience across the board

Does Yookos see popular social networks such as Facebook, Twitter, Google+ as competition? What about the networks specifically popular in Africa such as Eskimi, Mxit and biNu? How does Yookos differentiate itself in order to have users spending more time on it and not on competing services?

Yookos’ focus is on the African market, though not restricted to it any way, which probably makes the players within the continent the competition. However, we believe that Yookos is not necessarily a substitute but rather complementary to these platforms one way or another.

In terms of differentiation factors we have made significant strides to have our own unique identity and offerings. As opposed to the rest of the industry players, we offer not just one but a bouquet of features that allow you to connect, share, and play with others across the world. It’s more than just a status update or picture blogging, it is an assortment of social networking features brought together on one platform and allowing you to share this content with your entire digital community.

The big difference also lies in the fact that we are all about clean content and entertainment. We’re looking to reflect and promote generally good uniquely African values which sometimes get overlooked or diluted on other platforms and networks. Another difference is the fact that we really try to encourage discussions and conversations: people talking to each other, rather than at each other.

Any other relevant updates?

Yes! We are excited about our recent release of the interactive Yookos mobile, which can be accessed on m.yookos.com and of course the next big thing will be the release of the next version of the Yookos platform taking place later in January. This will include the ability to sign-up with your Facebook, Gmail, or Twitter account, a much cleaner and more interactive interface, customizable activity stream, and preference grouping of your  connections to mention just a few.

9 thoughts on “About Yookos, its SMS adverts, and its place in the social networking space (interview)”