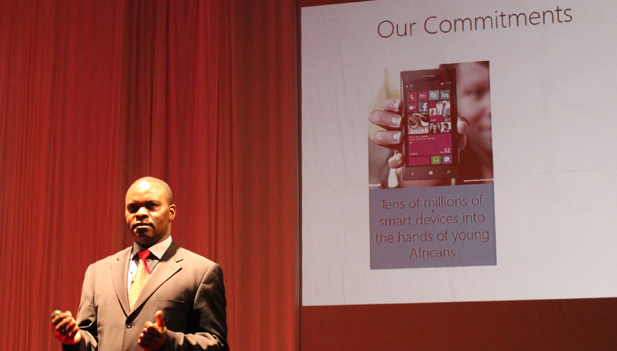 To Microsoft Africa has traditionally been a place to sell its enterprise software products. Through local partners yes, but the continent was primarily a place to push products to. I imagine they were not making much owing chiefly to the piracy of its products on the market and so far it looks their concern about this was just as low. Whatever volume of products they were pushing sufficed. In that era Microsoft ruled computing both in the enterprise and at home and could take its sweet time postponing understanding and helping its market grow.

But the business environment on the continent is fast changing. Enterprise software doesn’t rule computing as dominantly as it did 10 years ago. Granted, the company’s software still rules the office. But its once tight software grip on everything computing is weakening. As the number of Africans buying computing devices balloons in Africa, the choice of device, platform and applications is no more limited to PC, Windows and Microsoft Office. There’s a whole mobile market that has been established, and its a market Microsoft wasn’t playing in seriously. The immediate threat, one the company is waking up to now, is that a new generation of computer and internet users – one many times larger than the small market of yesteryear – is getting introduced to computing on devices, platforms and through apps far removed from its enterprise domain.

In Africa, it’s a generation that recognises and identifies with the Google, BlackBerry, Apple and Facebook brands more than they do Microsoft. It’s a new generation that, coming from non-Windows smartphones, will be open to trying Google’s Chromebooks and Chromeboxes (Macbooks if they are loaded) before they try a Windows PC. Some of them will have all their needs met. Some that will not will of course try Windows and maybe even prefer it, but again yesteryear if you wanted to connect to the internet or do some office work stuff, you’d get a Compaq PC, Microsoft 2000, Office and Outlook Express.

This new and much larger generation of computer users understandably scares the hell of out Microsoft and the company is reacting.

Google’s already on the continent working with internet providers to improve connectivity, with startup incubators and hubs helping startups create solutions, with local university departments translating Google services to local languages, with small businesses getting them online. On the side, its Android open source mobile operating system has also lowered the cost of entry into the smartphones for many on the continent; cheap just-good-enough Chinese Android devices are awash on the market and the utility of apps like WhatsApp is pulling new mobile phone buyers to them.

In short, while Microsoft was concerned with selling more licenses through its corporate channel partners, unconcerned about the punitive pricing (which had many resorting to pirate copies), Google was making money in a different way; it was sending Adsense cheques to publishers on the continent. Small Adsense amounts yes but enough to demonstrate what computing and the internet is; lowered barriers and new opportunity.

Microsoft is reacting. Throwing money and promises that smell like a politician’s. And strange in-your-face names like 4Afrika.

A press release sent out by the company this week goes:

“YouthSpark forms part of this 4Afrika vision and through YouthSpark, we are paying specific attention to the next generation of our ecosystem through our work with schools, students, start-ups and the developer community to drive skills and ICT integration which will in turn trigger growth.

Through our partnerships with governments, non-profit organizations and businesses, Microsoft YouthSpark aims to empower youth to imagine and realize their full potential.

By 2016, the Microsoft 4Afrika Initiative plans to help place tens of millions of smart devices in the hands of African youth, bring 1 million African small and medium enterprises (SMEs) online, up-skill 100,000 members of Africa’s existing workforce, and help an additional 100,000 recent graduates develop skills for employability, 75 percent of which Microsoft will help place in jobs”

It’s never too late of course and I hope it works. Sincerely I do. Companies like Microsoft that are in it for viable business – theirs and by extension the businesses they work with – are best placed to do the work that’s so far been largely left to NGOs on the continent. The company makes great software too.

18 thoughts on “Microsoft wakes up to new Africa, reacts with youth empowerment initiative”