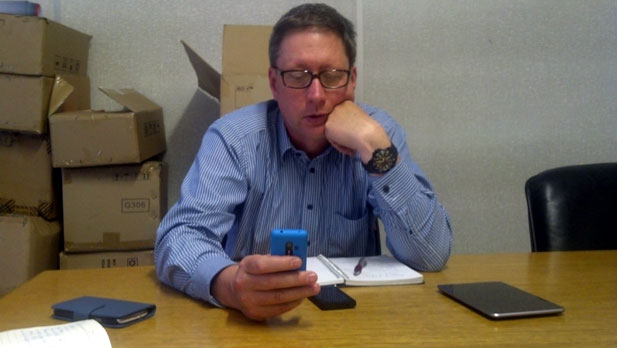 BiNu, the smartphone in the cloud company has hired former ForgetMeNot Africa CEO,Jeremy George, to help grow biNu users and usage in Africa. We met with George last week in Harare and he discussed their strategy on the continent going forward, the sum of which is to grow content and users.

George said that he will be travelling around the continent (Kenya, Nigeria, South Africa and indeed Zimbabwe) to basically promote the creation of new market-relevant content for those countries. In our discussion with him he indicated that a key thing for the company is to ensure they don’t become just another social network. You will remember that biNu has in recent months been morphing into its own social network with friending, status updates, photo sharing and other such.

BiNu is still primarily a “Smartphone in the Cloud” and with George it seems there’s more lets-focus-on-that energy.

But biNu is also primarily something else to most of its users, those in Zimbabwe at least; it’s a messaging app. An alternative to the ridiculously expensive SMS. Being viewed by your customers as primarily a low cost messaging app is not good because low cost messaging is fast becoming just a smartphone commodity. And the smartphones themselves are increasingly accessible at lower prices. US $75 low.

So biNu has to becoming more than just a social network, and it has to be viewed as more than just a messaging app. That something else it needs to be is ofcourse what it already is; a smartphone in the cloud. A personal smartphone in the cloud that has stuff that’s relevant to you right at your fingertips; like the local constitution when a referendum to decide it is just weeks away, like local music, or local books. Even movies eventually?

George says his mission as VP Africa is to find that content, and help the producers bring it onto biNu. On his trips around the continent he will be talking to book publishers, record companies, mobile phone gaming studios and other creators of content. Key to helping them produce the content is to build interest in developers to develop apps for the platform, or at least build biNu versions of existing apps and web content feeds.

The only thing left to figure out for biNu will be how to make that smartphone in the cloud somehow work offline. With irregular mobile data connectivity in the emerging markets it operates in, biNu users will want an option to see stuff while their offline. They’ll want their ‘smartphone in the cloud’ to have apps like WhatsApp which, even when you’re offline, allow you to view messages exchanged with friends some 1 year ago. They will, understandably so, not care that what makes biNu so special is that everything is in the cloud, including biNu itself.