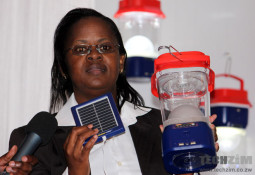 Yesterday we attended the launch by Econet of a new solar charger/lantern/radio combo product called the Power Lantern SW015. The product is an improvement of the lantern that was on the market which, according to Econet Services CEO, Darlington Mandivenga, the company sold 400,000 of.  We actually went to the launch hoping the company was officially introducing the Home Power Station, so it was a matter of having to do with what’s there. Still, there’s much to share on the Power Lantern.

The unit was demoed by Econet Solar Chief Operating Officer, Dorothy Zimuto. The Power Lantern has two USB mobile phone charging ports; one for ordinary mobile phones and another for high capacity smartphones like the iPhone. Apparently, the solar old charger couldn’t handle iPhones. It also has a solar lantern and an FM radio. Make that 2 solar lanterns actually; the red unit on top in the picture can be detached and used separately as a flash-light and FM radio, making it quite useful for walking in unlit areas at night. The whole unit, according to Zimuto, is also water proof.

The Power Lantern is priced at $45. A no-FM radio version is being sold for $35. A separate small solar charger, pictured below, is priced at $10.

The Econet Solar products are designed and supplied to Econet Solar by a company called Solarway which is headed by Marco Signorini (Remember the Econet Solar CEO). So far it looks Econet has created a separate company that just focuses on the design and supply of these things globally, with Econet Solar Zimbabwe just one of its customers.

Econet Solar falls under Econet services, which is headed by Mandivenga. Explaining his company’s determination to make available alternative power products, Mandivenga said research had revealed that their telecoms business loses between 20% and 30% to phone calls not made due to subscribers’ mobile phones being off. “The power company [ZESA] does not have the capacity to provide enough power for our subscribers to keep the mobile phones charged. Some people in rural areas, make a single phone call and then switch off their mobile phones to save battery” he said.

Mandivenga further explained that their primary objective with Econet solar was to provide alternative power for mobile phones and in the process found themselves solving an even bigger problem of lighting. He said hospitals locally had found the lanterns quite useful for when they don’t have power form the national grid. Students are also able to study under the light of the lanterns.

Aside from the 400,000 units sold statement, Mandivenga wouldn’t say how much the solar business has contributed to Econet over the past year, citing them being in a closing period in terms of their annual financial results. He also wouldn’t say how much of the company’s base station transceivers are now powered by solar indicating irrelevance to the press briefing.  We equally couldn’t squeeze out any information on the Home Power Station for reasons along the same lines.

As part of the people attending to event, we received the Power Lantern. As usual, we’ll give it away here to a lucky reader. If you’d like to be that lucky reader all you need to do is comment below (or on our Facebook page). At the end of the day we’ll do a names-in-a-hat draw and send the unit through to the winner. We of course reserve the right to exclude those one-word-I-just-want-the-charger comments.

Giveaway Update : We have a winner, and his name is Tawanda Mhuriro! A big thank you to everyone that participated!