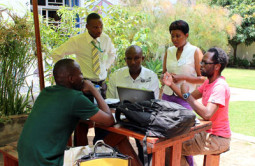 I’ve been meaning to post this since the Culture Shift Zimbabwe hacking event a few weeks ago. It’s a lessons learnt post to just note the things that tech entrepreneurs, developers and other such tech people should not keep in mind when coming up with new solutions.

The Culture Shift was different from other events we’ve been involved with in the past in that it sought to do exactly that, link techies to people that have enormous experience in a specific sector and have business problems that tech can address. With previous Jumpstart events, it’s basically techies looking to solve problems generally; some real, some imagined. That there still comes out some really brilliant ideas nevertheless is purely a result of an unwavering “if it were your money to be invested in the startup, what would you ask” principle by the judges.

Back to Culture Shift lessons, here they are in point form:

Having industry experience is an absolute. The experience doesn’t necessarily have to be as a player; it can be as a big passionate fan of it, or through close relations with insiders. Trust is an important thing, and if you’re an unknown, no one trusts you.

One could argue of course that being part of the old industry means not thinking out of the box enough to disrupt it effectively. And that’s indeed true. We just found that networks and trust still matter a lot locally. Introducing a new concept to an industry without an industry insider backing it (or explaining it to their peers) can mean that the idea never sees the light of day. Or that it does but no one uses it. Or that people come to use it but the content owners (for certain types of startups) refuse with their content.

The Openbook team for example was able to work with industry people to understand quickly how the writing and book publishing food chain works locally, what pains writers have to do with, how piracy works in the industry, and more importantly for their solution, why writers of certain types of books find no value having them published locally. There were also some interesting knowledge like the fact that writers actually do not prefer to self publish as this would send the wrong message/perception about them in the industry. Add to all this, the fact that local writers’ associations were now a phone call away, and one made by their own.

The nature of the event allowed all teams to have this rich individual and institutional memory base to tap from. The event created an atmosphere of trust that you’d not get just walking into some office to pitch an idea.

Focus on something simple and doable then do it. You can add other complicated stuff to it later. I’ve never seen Getting Real applied so effectively. You’d see a frighteningly complicated and fat we’re-here-to-solve-all-problems idea stripped down to a clear one-minded achievable. And you’d see the whole team converge and understand in simple terms that one thing they’re working to deliver. And they’d know what to do next to achieve it and how they’d know they’ve done it. It was great to watch.

Nothing beats visuals and video at explaining. Your mission may be clear and one-minded to you but if you still can’t put into understandable form to others (partners, investors, potential customers) then it’s still far from simple. Visuals & video force you to simplify and tell the story clearly. I frankly didn’t know we could easily get such talent locally to produce such great explainer graphics and animation in such a short time. Big eyes and Openbooks all did great at this.

These are the things that I noticed. If you were at Culture Shift or attend other such geek events, you probably have other lessons to share. Please share in the comments. Of course none of this means that the winning teams will definitely become successful ventures. Success or death depends on a lot of other things. It’s the beginning of a startup journey on a different path at least.