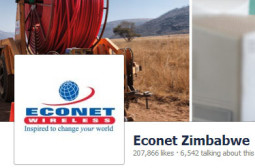 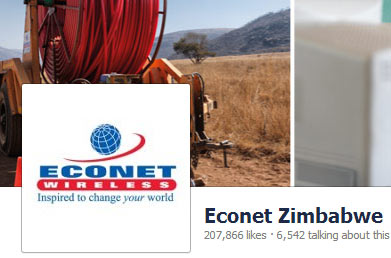 When we listed Zimbabwe’s most ‘Liked’ pages on Facebook late last year, one company was clearly conspicuous by its absence from the list of companies and brands that had the largest following on the social network; Econet. This despite that offline, the company commands one of the highest, if not the highest, customer base in the country.

Earlier this year we decided to just list the mobile operators ranked according to their following on Facebook and Twitter. Econet had woken up, but they were still slightly behind Telecel, who clearly had a talent at amassing followers on social networks.

All that has changed. Well, the Facebook part at least. Since January, the Econet Facebook page has gradually surpassed Telecel’s following to become the most followed brand on Facebook. As of this writing, Econet had 207,800 likes, 22,000 ahead of Telecel which had 185,800.  Telecel remains in the lead on Twitter by a very wide margin, but it’s worrying that since October they have only added less than 200 followers where Econet has added almost 3,000 followers.

As far as we can observe the increase in followers on the Econet page is because the company started deliberately posting more content as well as posting content that is engaging; polls, product tips, questions to its followers, information about new promos and so forth. It’s stuff Telecel has been doing all this time; the difference probably being that even on the ground Econet has far more customers than Telecel. In the millions. It could also be that Econet content is far more engaging but that’s subjective of course.

There is however still the unanswered question of how many of those Facebook and Twitter followers are actually real people. Remember fake followers are a million dollar business.

More Facebook likes doesn’t mean more revenue directly, which is not what social networking for business is about. This means an opportunity to engage your customers directly on how they are consuming the services, what products they love and those they hate. And, for the local mobile operators especially, this is an opportunity to provide answers to questions customers have, and even the page to act as a customer support channel.

More brands locally could benefit from this direct engagement with customers as long as they approach social with a strategy and not the sparse haphazardness that has been most business social media presence locally.

NetOne in the meanwhile, remains the only mobile operator unconcerned about engaing their customers on social networks. The company has 2,300 Facebook likes and 53 followers on Twitter. They last tweeted on 9 December and took a break!