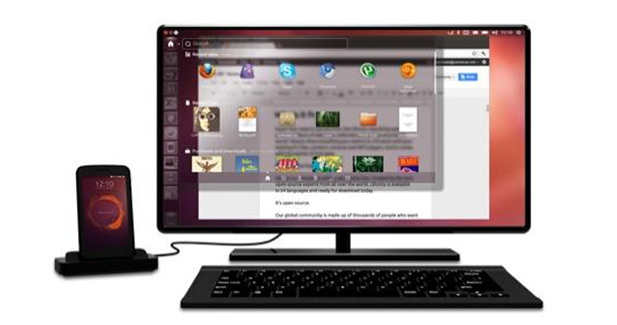 We have all heard the talk of how all or most our computing is going to shift to smartphones and tablets by the year so and so. The truth is I am still to encounter anyone who is willing to give up their traditional device, Desktop PC or Laptop, for any of these so called modern platforms. Some of the reasons are a result of completely irrational intransigence but one of the most common reasons given is that a great deal number of tasks are still difficult to perform on a tablet or smartphone. Examples  of such tasks are Word Processing, Graphic designing, Website designing, Video editing etc. For all these problems Ubuntu Phone might just offer a compromise.

It has been a while since the Ubuntu Phone was announced earlier this year and its creators were quite careful to inform consumers that it might be a while until they could buy the phone. This week Canonical, the guys behind the Phone and Ubuntu, launched what will be the biggest and most ambitious campaign on the crowdsourcing site Indiegogo to raise money to start production. The target is to raise $32 million and they have already breached the $3.5 million mark with 29 days remaining. It is telling however that Canonical’s founder chose this route instead of funding the project himself, it might be that Canonical is using the exercise to gauge the market’s interest as well. So far it appears people are very interested.

The Smartphone and tablets market is pretty saturated at the moment but I believe Ubuntu have a card up in their sleeve that might prove to be the dealmaker here in Zimbabwe. The Ace is their docking feature, when the phone is docked it turns into a full blown PC which can be connected to a monitor or TV and run native desktop apps. This will enable people to do some of those PC oriented tasks mentioned before such as Word Processing with increased ease. In a country where money is hard to come by it might be worthwhile to combine your phone and computer into one device. There is even great news for those of us who have developed quite a bond with Android, the proposed design for the Ubuntu Edge phone has the ability to boot into Android when required.

Although a prototype is still yet to be realised Canonical has been offering the Ubuntu for Android for those folks with high end Android Phones. This enables the phones to be turned into PCs. The required specifications  kind of limited the access to the feature however and perhaps the Ubuntu Phone will change that.

Whether or not the Ubuntu Phone will catch up here in Zimbabwe when it is released still remains to be seen. In the meantime you can use your current Android device to test the touted feature and give us some feedback. You can also visit the Indiegogo page and contribute to the Ubuntu Edge Phone’s campaign.

16 thoughts on “Will the Ubuntu phone catch on in Zimbabwe?”