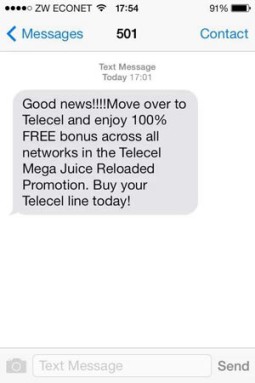 Telecel Zimbabwe (or whoever is doing this on their behalf) may have just pulled a sneaky and bold spam stunt on their arch-competitor, Econet. Some Econet subscribers took to Twitter starting yesterday evening to share that they were getting messages they had not subscribed for. The message, in the image on the right, had the following text:

Move over to Telecel and enjoy 100% FREE bonus across all networks in the Telecel Mega Juice Reloaded Promotion.

The promo in question is ofcourse this one we wrote about earlier. Here are some of the Twitter updates:

So @Telecel_Zim now has to resort to illegal spamming of a rival's customers? Tough times. cc @Techzim

The question of SMS spam is ofcourse not new in Zimbabwe. Local companies have harvested numbers and emails to then mindlessly blast messages to the numbers with no care in the world. In their defence, mobile networks have said that SMS spam is difficult to control as sometimes mobile users subscribe for these unknowingly through third parties like retail stores.

A source at Econet said there’s some concern at the company at the development. At Telecel, an official we contacted said he needed to investigate this first to determine what exactly was happening.