The October 2013 #MuzindaHackathon: the apps that came out of it 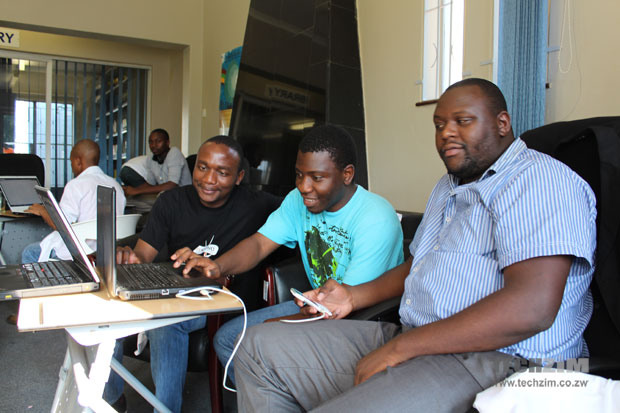 We’re just finishing at the Muzinda Umuzi hackathon that’s been happening since yesterday evening here in Harare at the hub’s center. This is the first hackathon the new hub has hosted. The focus of the hackathon was education apps and there was no restriction on the type or platform of the app.

We had the opportunity today to go around the hub meeting the teams while they worked on their apps and as usual, found it quite interesting how much a day of hacking (even one open ended like this was) can result in people creating some potentially very useful apps. Some with commercial possibilities as well if pursued beyond the hackathon. There were about 30 techies and designers all in all, the bulk of them developers. In terms of where they came from, it was a mix of Harare Institute of Technology (HIT), NUST, and the University of Zimbabwe students, as well as some freelancers!

Anyway, the point of this article is the apps themselves. Here’s a list of what was presented at the end of the hackathon.

Name of App: Help a student
A resource mobilisation for students app. It solves the problems of resource limitations by enabling students to list on a website the resources they may be in need of (say a book, computer, internet modem or even school fees). People and companies interested in helping can then access the website and offer help. The team said its really crowdfunding for students with the exception that sponsors can help with more than just money.

Concept: An Android app providing a resource base for students and also allowing progress monitoring of students by the teachers. Teachers, parents and students can also interact via the app.

Name of App: iDzidzo.
Concept: A ‘study mate’ app that replaces the old traditional group study, democratising knowledge and sharing it remotely. The app stores important note-form texts for students/academia that can be used as ‘flash cards’, also features a handy, yet fun filled group study game. The app has some gaming components with an adaptation of hangman where in a group, a student that doesn’t answer correctly increasingly loses the game.

Name of app: Syllabus
Concept: An app that teachers (and the administrators) at a school can use to standardise teaching schemes. Through the app, students are also able to provide reports on the progress of students, attendance, and what methods they are using. The team used the UNESCO website to learn more about learning material for primary school level.

Name of App: Drivers Ed
Concept: An Android app for vehicle drivers education. The app teaches the driver (or anyone learning to) basic driving information as well as safety tips. The app also has an test that users can take to measure how much they know. It has a social layer allowing users to share the rules and tips with friends on social networks with a single click.

Name of App: Zimscholar
Concept: This is a desktop app providing students a in high school a source of education material. It has the content offline as Internet is not always accessible to students. The app also has a chat function for the students on the same campus network.

Name of App: Zimedu.net
Concept: A website allowing educators to share study notes and syllabi with students. The students can also contribute notes to the website. Website also provides students with tips to prepare for exams.

Name of App: This is more a packaged hardware and app solution by a team called Swift.
Concept: The team designed and have had a low cost tablet made in China that has packaged apps and content for high school students in Zimbabwe. They claimed they can land the tablet in Zimbabwe for about $30. Their aim is to replace expensive books and other such material. The prepackaged apps include a localised encyclopedia which is also provided in the local Shona vernacular

Name of App: Zimed
Concept: An adventure game for students that helps them learn as they go through various stages of a story they participate in.

Name of app: Mobile Learning
Concept: This was really just a concept as the technology failed the guy and he wasn’t able to present anything. His concept though was that there needs to be more awareness of the opportunity of mobile learning in Zimbabwe and that he would start a blog that offers such information.

Name of App: Share-Ed
Concept: Educators share learning material with students via the app. Such material can be revision notes, exam papers, study notes, or information about sources of information. The techie, a 6th form student at a Harare school, says he aims to provide information to students in a way that doesn’t cost them in mobile data bundles.

Stay tuned shortly for the winner of the hackathon!