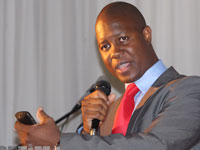 This week, at the launch of a new company called Logicode, we met up with Oracle Applications Territory manager for the SADC region, Thomas Mangwiro. He spoke to us about the companies strategic focus in the region and specifically in the country. Below is the text of the interview we had with him.

Techzim: We just want to understand the size of business that Zimbabwe is in relation to other countries, and the prospects of in terms the growth of your customer base in the country:

Mangwiro: We don’t have exact figures on us right now, but we do recognize that we are playing a back foot to our competitors who seem to be more entrenched in this market.

Mangwiro: SAP would be one of our competitors from an applications point of view. IBM from an infrastructure point of view, that is servers and storage.  But I would say on the servers and storage I’d say we’re competing very well. Why I say that is because there are some very innovative tech products that have come into the country before IBM similar type products have come to Zimbabwe. There we’ve been doing pretty good. But where we’ve not been very strong is the applications side, hence there’s more strategic focus on applications.

Techzim: Oracle is generally seen as a database company, and in the presentation today you were saying Oracle is not just about databases.

Mangwiro: It’s not. I’ve been in the country since July coming in twice a month speaking to different companies and the feedback I got literally was “oh, but we thought Oracle was a database company”, and that is one of the myths that I’ve been trying to dispel. I think it’s because we have the number one relational database in the world and that’s then how we are perceived.

The myth is only but a myth. What we really are is an IT company which serves from storage to servers to operating systems, virtual operating systems, then your middle ware, and then your applications, so we have your complete enterprise solution. And the value differentiator of our enterprise solution is that we are totally integrated so the devices are integrated and engineered to work together. Whereas should you go to competitor type products you will notice that they are probably better in the storage, servers and middleware products and not so strong in applications. Or they are strong in applications and not so strong in your servers and storage. At Oracle we call it the Red Stack and all the systems are integrated to work together.

Techzim: What is the structure of Oracle representation in the region and specifically the Zimbabwean market?

Mangwiro: Oracle has invested in the region. Unlike before we have a new SADC team that looks at each product line separately. There’s a separate person for servers and storage, a separate one for databases and a separate one for applications. And inside those applications we have different types like the core ERP, and there’s a person that looks after that. Human capital management has a person. Customer Relationship Management has a person and it’s all from a regional perspective. So there’s investment into specific product lines in the region.

So in terms of what we see for the country, we see a lot of potential. There’s been a very big vacuum in terms of education and in terms of knowing what is out there technology wise. But people are picking up on new technologies such as cloud services. The future for Oracle is through Oracle cloud. We want customers to just get a service and not worry about the nuts and bolts of hosting it.

Today we demonstrated the People app and there are so many other cloud applications and that’s why we have Oracle Day in Zimbabwe early next year to showcase the full range of what we have.

Techzim: You mention cloud. The recent of one your competitors has been to make their products available via the cloud and through that make them accessible to business that would otherwise not be able to afford the full integrated stack that would be implemented at a customer premises. Is there a similar push from Oracle where hosting the solution yourself opens it up to lower budget businesses.

Mangwiro: I cannot speak directly to what the competition is doing or how it is doing it. But oracle is one of the ultimate leaders in cloud technologies. We power the infrastructure of some of the largest internet companies in the world. As an organisation, if there’s one thing we really understand it is the cloud. There’s a huge uptake worldwide of companies taking up our cloud offering, not just because it’s a smaller cheaper package to put out there. That’s not the reason… the core reason is that for an organisation their core business is not HR, or one of such functions. They need a service and as Oracle we offer that through applications like the Human Capital Management. We manage that on their behalf that while the business focuses on their main line of business.

Techzim: What about the prospects of the uptake of your cloud applications locally?

Mangwiro:The prospects of uptake locally are phenomenal. Why I say that is that Harare alone has one of densest networks of fibre optic cable in Africa. And just by that mere fact the prospects are very high. One of our clients, a retail supermarket called OK Stores, has got about 52 stores and the bulk of them are connected by fibre to the head office. It’s unbelievable and unprecedented. Fibre cable companies like Liquid Telecom have done a lot in Zimbabwe to make the country ready for cloud.