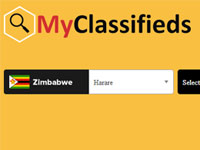 Traditionally, newspapers owned classifieds. Some newspaper consumers (desperate home and job seekers) even bought (well, still buy) the whole paper just to look at the classifieds section. On the internet though, classifieds as a business was taken from the paper companies. Internet startups, internet only startups to be specific, proactively built brands, huge audiences and businesses based only on classifieds. This happened right before the eyes of the newspaper companies, and in most cases, even with the assistance of. But they’re beginning to wake up to the internet opportunity. Late, but not too late. Such is the story of Alpha Media Holdings and their newly launched myclassfieds.co.zw.

If there’s a type of company every classifieds wannabe startup envies it’s the newspapers. A wide distribution, a large customer base (slowly dwindling but game changing nonetheless) and the much needed chicken in the classifieds chicken and egg conundrum that these startups face. The content source that feeds the thousands of classifieds ads on the paper each morning being the chicken. Alpha may have woken up to this. Of course the internet is a whole different ball game and having content is not equal to executing successfully, but waking up alone in a market largely asleep is quite noteworthy.

There a few differences though; like the fact that theirs also acts as a directory listing physical business outlets like EcoCash agents, flea markets, malls etc… We’re guessing this was spurred by the need to have the new service look content rich. According to executives at the company they already have 300 storefronts and some 4,000 ad listings.

In terms of competition locally they are running against classifieds.co.zw, Dipleague, and the offline guys, (including their own offline). In future we’re guessing the Zimpapers group will be next to wake and come fight for some online market share. They have indicated already they’ll be paying more attention to the internet. In fact, the honest truth is that Zimpapers are the sleeping giant here. This ofcourse doesn’t imply that if they decide to play, they’ll win. Different ball game.

The Alpha Media Group Chairman, Trevor Ncube, says in a release sent out to announce the new classifieds service:

This investment is a recognition that a big part, of our audience has moved from print to digital platforms. This audience is younger, smarter and loves their mobile phones. But they are not in love with newspapers. While over 90% of our revenues still come from our print products our audience has changed consumption habits. We are thus future proofing our business. Myclassifieds.co.zw sits very well with our investment in mobi news. We have to place our independent content on platforms where our readers are.