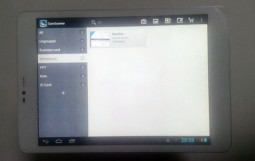 Bethel Communications last night unveiled itself as Astro Zimbabwe the company behind the Ibho range of Android smart phones at an event in Harare. Although the company has been active in the market for a little over a year now, this launch event was to unveil the Astro Brand and a host of mobile devices they are bringing into the market.

The Company was founded by Munyaradzi Gwatidzo and he is the Current C.E.O.

Astro unveiled all their devices including the entry level Ibho Y and medium range Ibho T. Their only premium phone is the Astro Virtual which retails for $333. They also introduced an 8” Android 4.1.2 phablet they call the Astro Funbook that costs $399. Techzim hasn’t yet had a chance to get a feel of any of devices but a detailed review will follow as soon as we get our hands on them.

But it is clear that Astro/Ibho will be competing in the low cost android device space currently dominated by G-tel. Astro, like G-tel will be pushing it’s devices through credit sales and it has lined up First Tel Cellular, Nano Appliances and OK Mark as their distribution partners.

Astro Zimbabwe CEO also introduced the “Astro Box” a small device that turns your TV into a computer. We did not quite understand how this one works but it’s due for release on 15 December 2013. Other devices like the Astro Virtual Pro and a kids tablet they are calling a “Kidlet” will be also released within the coming weeks.