So, everytime we post an article about a new Econet value added service, it’s followed complaints from some readers who apparently feel cheated that Econet ended the EcoLife service. Some even go to the extreme of complaining that Econet owes them Ecolife money. Take yesterday for example when we posted the Econet to provide loans via EcoCash story. One reader commented on Facebook:

Yes but the actual banking services you have to go to the physical bank.My money at Barclays I dont trust Econet what happened to our EcoLife ?

well they never are clear with their projects e.g ecolife.still need an explanation PLEASE

At the recent announcement of the company’s half year financials a number of journalists complained to the Econet CEO about EcoLife’s short life and the monies that had never been paid out. The CEO explained as best he could how the product worked and why therefore Econet didn’t owe any subscribers Ecolife money.

The life of the product was indeed short quite short; October 2010 to Feb 2012, including the ‘suspended’ period in between when the two companies were fighting in the courts. But the truth is that technically people actually never paid a cent for actual life cover. How the product worked is that Econet encouraged you to buy a certain minimum airtime to qualify for life cover. The airtime was yours to use so you did get the money’s worth in airtime.

It was ‘free’ cover. Yes, free in the operator ‘buy our expensive voice services and we’ll give you this for free’ sense, but free all the same because you do buy on those expensive tariffs anyway.

Here’s an explainer image from back then: 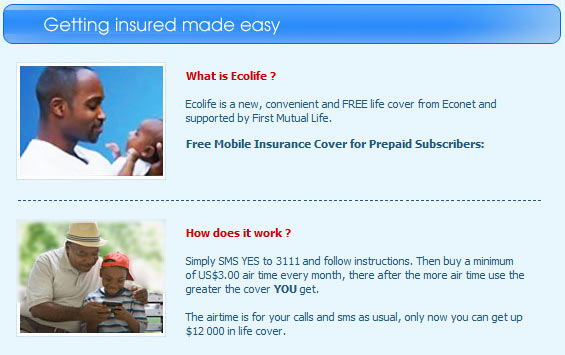 That said it clear enough there.

As for how long the cover would last, information publicised then, but which is still available on the Econet website says it clear that it’s one month, unless the subscriber renews.

But all that aside even, when the agreement expired in February 2012, econet had ads in the press telling Ecolife subscribers that if they were due a claim (the death of a subscriber covered) they were entitled to it and could get it as long as they met insurance claim conditions (within 90 days, death certificate etc..). Local papers and even us covered that public notice. How many did follow through to get the insurance is ofcourse another matter, but the fact remains that the notice was made.

The product was retired and this to be expected of any product by any company. For commercial or other reasons, products are retired and customers are made aware so they consider other options. Why people are mad at Econet for this beats us. Traditional insurance companies themselves introduce new products and retire old products for various reasons and they never get such backlash.

Maybe the lesson here for Econet is to communicate better what a product offers. With Ecolife it seems people believed they were paying actual money for life insurance. And maybe also to consider carefully how to handle a fallout with partners; the very public fight with a partner, the switching Ecolife on and off silently and lack of clarity of what was going on, all affected the image of the company negatively and seems people lost some confidence in them.

21 thoughts on “Dear people, why are we still complaining about EcoLife?”