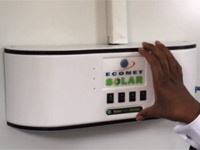 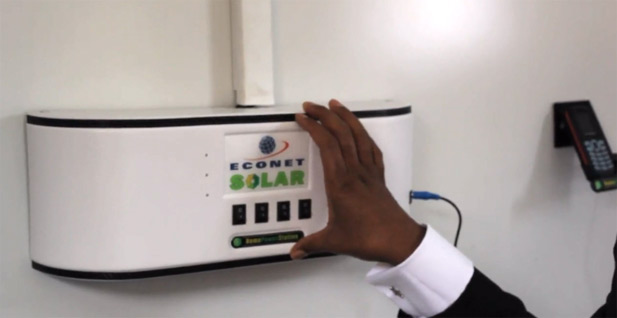 Remember the Econet Home Power Station(HPS)?  It’s the mother device of Econet Wireless’s solar company, Econet Solar International (ESI). It first surfaced at the COP17 Summit in late 2011 with the promise of a commercial launch we expected to have seen by now. At least trials reported to have been taking place last year suggested so too. Hasn’t happened yet ofcourse. And just as we thought there really was nothing going on in the background, an announcement by Econet at the AfricaCom conference says otherwise.

Apparently, HPS trial has accounted for installations in 2,000 homes across the country, with a total number of 8,000 people using it. The announcement says the HPS has been fully tested now and improvements made to the device like increasing the battery size two fold.

The dream remains the same though; Power is a huge problem in Africa, and solving it to an extent people are willing to shell out hard earned dollars can create huge business too. The HPS is a solution for lighting and charging mobile phones. Instead of burdening customers with the upfront cost of about $200 for the device, Econet’s plan is to take small deposit from the customer (between $10 and $30 the announcement says) initially, and then charge about 25 cents a day. We’re guessing the 25 cents would come from an EcoCash wallet.

Solar business aside, more powered mobile phones is good for Econet’s telecoms business especially in countries like Zimbabwe where electricity is in short supply. Econet has said before that they lose as much as 20% revenue in unmade calls due to dead batteries annually.

On what stage they are at now, the ESI chief executive, Luc Tanoh said:

We wanted to offer people a cleaner, elegant and safer solution to suit their needs for lighting and charging phones. And by combining the expertise we have developed across the Group over the years, we have developed and refined the HPS which can now be widely adopted by customers across the continent.

Maybe we will see these things in the Econet shops anytime now. The ultimate plan, the announcement says, is to power about 125,000 with the solar devices across Africa in 2014.