The Karbonn smartphone brand is one of the low cost smartphone brands that is getting popular with the Zimbabwean market and their flagship Titanium S5 (at least locally) makes a good case for value for money. We are told the Indian brand is outselling trusted brands like Samsung and Sony in some local chain retail store like TV Sales and Home.

Big, thick and weighty are three words that sum up the phones physical presence. It’s not too heavy a phone but when you hold it, you are well aware of its presence compared to the GTel A717 explorer that is very light weight. 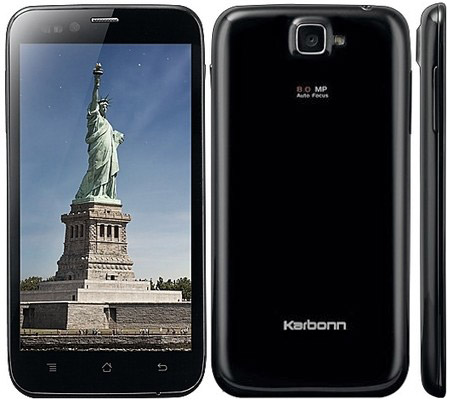 Although graphics look decent at 240 ppi pixel density, something higher, maybe 340 ppi could have done more justice to the 5” screen. The screen is however a real pleasure for gamers but will drain your battery fast if you are the addictive type.

The Titanium S5 has Android 4.1 Jellybean and they decided to keep it generic leaving out fancy custom additions and launchers like Yandex found on most low cost devices.  The interface also has no default search limiting the buttons to three.

The Karbonn Titanium S5 has all the “to get you going” apps pre-installed including WhatsApp, Fm radio, Chrome and WeChat. Pretty handy for local customers considering the cost of downloading these must have apps.

The camera is probably the biggest let down on the Karbonn Titanium S5. Although it still produces decent images, the Titanium S5’s 8 MP camera did not compare well to the GTel Explorer A717 in the same conditions. It’s maybe tied in to the screen quality but the Titanium’s S5 photo’s could not match the ones produced by the GTel’s in sunlight conditions. The pictures were darker and less reflective of the sunlight conditions compared to the vividly pleasant ones produced by the GTel Explorer A717.

Surprisingly, the Karbonn Titanium S5 produced better quality images in limited light areas compared to the GTel Explorer A717 which still had a more vivid quality but distorted the color of the object.

Overall, the Titanium S5’s camera is probably its weakest point.

To test performance, our first port of call was the AnTuTu Benchmark which put the Karbonn Titanium S5 in the same range as the Samsung Galaxy S2 but still 17 places below the top ranking Samsung Galaxy Note 3.

The Titanium carries a Li-on 2000mAh battery which is pretty good but if you factor I the larger than life 5” screen, a quad core processor and put gaming into the mix, the battery becomes inadequate. Nevertheless, the battery will last you a day at optimal use.

We can’t ask for anything more from a phone worth $329. The best part about the Titanium S5 is it looks and feels durable, has trusted Qualcomm snapdragons and does not look feeble and vulnerable as most low cost devices on the market.

They could have done more with the display and camera but even as these the weak points, they still do a decent job.

Overall, the Karboon Titanium S5 can prove to be a good alternative if you are looking for a good high end, large screen device on a budget.