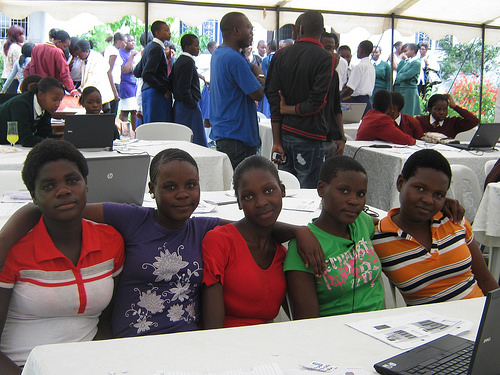 Scores of girls between the ages of 13 – 23 congregated at Hypercube Hub on Saturday in Harare for a convention dubbed “Young Women Build Mobile Apps Workshop Zimbabwe” that was organized by Techwomen Zimbabwe. The girls included those in primary and secondary schools as well as some at university level. The event was also attended by teachers, mentors and developers who will assist the girls to develop proper apps that they will pitch in a competition called Technovation Challenge.

“As a global mobile app building competition for girls. The overall goal of the competition is to encourage girls to pursue careers in technology and computer sciences. So girls are supposed to identify problems in their communities and then they are supposed to work in teams of four or five. And they come up with an idea, the best of an idea they work with their mentor or teacher and then they build their app. They are also taught entrepreneurial skills and how to pitch the idea before investors, so beside the winning part, you are going to come out of the program and as a better person and well equipped in terms of entrepreneurship. So at the end of the six week curriculum you are supposed to come up with your prototype of the mobile app, you are also supposed to come out with a business plan and a 4 minute video pitch that you submit online and then they will choose the best 10 teams worldwide. The best team will go to Silicon Valley in USA in June were they will pitch their idea in front of investors. And according to the three categories those in junior will win 5000, senior high school and undergraduate best team win 5000 and those in between the category will win 10000. So the grand prize is 20000 dollars. That’s Technovation Challenge for you”.

Techwomen Zimbabwe co-founder Unity Chipunza lastly spoke about the role of mentors and teachers in the Technovation Challenge. Here is what Unity said;

“Why are we talking about mentorship and teachers in this particular program is that you are not alone. It’s not going to be you, you, you doing everything. Even in the Silicon Valley the winning team will be having a teacher and mentor. So you won’t be working by yourself. The teachers are there to interpret the curriculum to you to assist you to guide and ensure that you are meeting the targets, the deadline and all and so you will be working with the teachers, trying to help them also help you so we will be together as we go in the race and we want to ensure that we have a team that is in Zimbabwe that is going to win in this race, at least in one of the categories. This will be our first time but one thing that I know about Zimbabwe is that, put us anywhere and we excel, that is what we know about Zimbabwe. So I know that you girls can do it. Look at yourselves as entrepreneurs, don’t look at yourself as coming from this school or this family but look at yourself as a technologist, someone who can design someone who can pitch an idea. When we talk about pitching we are talking about advertising your idea, telling people about your idea, telling people about your product and luring them to like your idea, so you are going to demonstrate that and looking at all these faces I am seeing it happening already. So ladies and gentleman this is Technovation Challenge and we are going to go through it. The 12 weeks are going to be exciting I promise you to just put your hands to it, don’t turn back. When the going get tough, rise up to the situation. We want to go to the end with every team and we want to succeed.”

On the day, the girls were introduced to App Inventor. App Inventor for Android is an open-source web application originally provided by Google, and now maintained by the Massachusetts Institute of Technology (MIT) that introduces newcomers to coding to create software applications for the Android operating system. With the assistance of guidebooks and developers the girls were taught how to use App Inventor to make three applications that included an application called Talktome, that speaks text entered into it as well as two games called Doodle and Bouncing Ball.

This article was written by James Mlambo and was first published on Mobile Learning Zone.