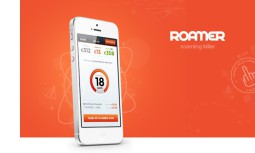 Roaming tariffs are quite frankly ridiculous! The world over. For example, a story is told of a teenager who came back from an overseas trip to a phone bill of about $6000. Her one crime; doing normal teenage stuff like post to Facebook and share photos. Roaming charges are such a big issue that the EU has actually put in place plans to completely scrap mobile roaming charges between the member states by 2016. Good for them!

Unfortunately, the EU is not the whole world, and the rest of us have to live with the exorbitant charges if ever we want the convenience of using our phones while travelling. If truth be told, we cannot blame any one MNO for these charges. The way this whole roaming thing works is this:

If we were to significantly lower (or outright eliminate) the roaming charges, we would need either to negotiate for lower interconnection fees between the host and home networks, or alternatively bypass the whole interconnection system completely. That’s where Roamer sort of comes in.

Roamer is a simple and free Android and iOS app that links a user’s local number to an international SIM card. New users on the app get free roaming credits worth about $0.69 for roaming calls and can top up with $13, $27, $41 and $67 roaming bundles. The way it works is really simple:

It appears that behind the scenes the following happens:

One of the major advantages of Roamer is that you can still use your number even when you are abroad and you can gain cost savings of up to 90% (according to their website). For example, theoretically using the app in Zimbabwe with a South African SIM card, a call to the USA will be about $0.91 (about R9.80) whereas with the normal Vodacom roaming tariffs it’s about R25.00.

Now to answer the question I put forward in the title of this post: No, not yet in Zimbabwe. When I asked the support team at Roamer if they plan to support Zimbabwe and other African countries, here was their response: 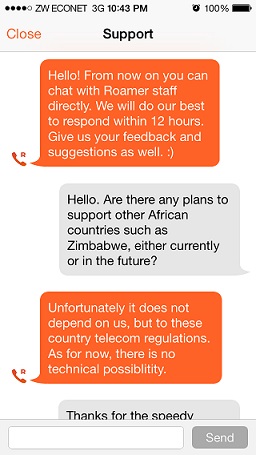 If we can’t have this at the moment, at least those in the diaspora can and I seriously hope it can be inspiration enough for someone somewhere to do something about it.

6 thoughts on “Are we finally kissing goodbye to ridiculously expensive roaming charges?”