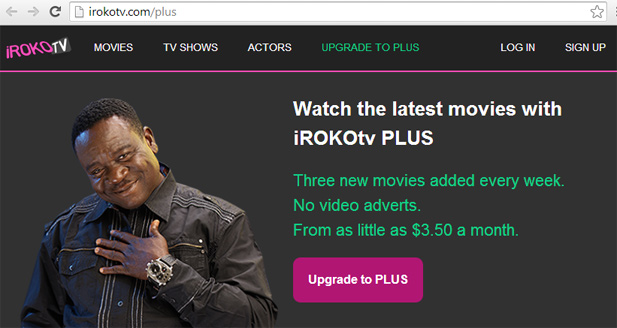 Jason Njoku, the founder of what is arguably Africa’s largest online movie service, iROKOtv, announced today that his company is going to stop the free ad driven component of their Video on Demand service to focus exclusively on subscriptions. The announcement was made in a long blog post titled Killing iROKOtv posted on Njoku’s personal blog.

In the announcement, Njoku describes the move as “the most dramatic thing I have ever been part of”, testament of how this may either blow in their face or make a big change on the future of Video on Demand on the continent. Onwards iROKOtv will just be iROKOtv PLUS (that comes with a free 14-day trial) and no more of the free ad supported version. At the time of publishing this article however, the free version both the free version, irokotv.com, and the paid version, irokotv.com/plus, were available. Njoku says the migration started today.

Exclusive focus on the subscription model itself is not new in terms of VOD offerings globally or just on the continent. Netflix‘s business for example is already configured this way. To understand how big a deal it is for iROKOtv however one has to consider that unlike Netflix which was built from a DVD rental business in its early years, iROKOtv was founded purely as an advert driven online movie service, a business it made all its early revenue from. Hence the reference to killing iROKOtv.

Wabona,  Multichoice’s BoxOffice Online and recently launched Africa Magic Go, are also all already subscription configured making iROKOtv a follower really, but again, unlike iROKOtv, these never tasted millions from online movies via powered by ads. And indeed, there are still lots of movie ‘startups’, especially the hundreds of YouTube channels on the continent, that are reliant purely on ad revenue.

According to Njoku, even though the ad revenue is still very good right now, the average revenue they have been getting from advertising per user a month is 15 cents, compared to $6 from the paid subscribers.

“We are about to go conversion crazy. I am literally betting the entire company and millions of dollars of revenue on a dramatic shift to a paid only model. That is the only future I see.” he says in the post.

Njoku also says that despite a heavily competitive market in Nigeria, they have managed to remain market leader, and that this change was necessary if they are to keep that lead.