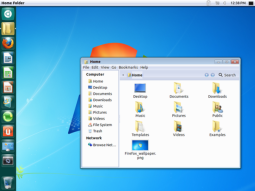 On the eve of Independence Day, folks who believe in the right to control their own software and computers will be celebrating a different kind of independance; the release of the latest LTS offering from Ubuntu. On Thursday this week Canonical (the guys behind Ubuntu) will be releasing the latest version of their version of the operating system-version 14.04- code named Trusty Tahr. This is a Long Term Support release that will receive support and updates for the coming five years which would be ideal for business and all late adopters. Late adopters are all those people that still have a Windows XP machine humming somewhere in their house.

It is rather ironic that the most secure way to run your Windows XP dependent software at the moment is using Ubuntu and Wine. Wine ( short for Wine is not an Emulator) is a compatibility layer that you can use to run native Windows programs on Linux. Despite the fact that Windows XP is no longer supported you can still run software made for Windows XP in a “Windows XP bottle” and you will continue to live happily in the XP realm. There are several scripts and customizations that can be used to ease your life when using Wine: a paid version from the Wine developers called Crossover and a free version called PlayonLinux.

It is rather fortuitous, I think, that XP support ended a week away from a release of the most popular Linux distribution’s LTS release. With Trusty Tahir you will get support for the next five years. Support comes in three forms: Community support from Canonical affiliated websites like ask.ubuntu.com and ubutuforums.org which offer free support, Canonical paid support dubbed Ubuntu Advantage as well as free and paid support form third parties.

If you are one of those who joined the Windows bandwagon because of the aesthetics then you should be pleased to know that Ubuntu is highly customisable. Don’t believe me? Let me give you examples of screenshots. If you were say a hopeless Windows groupie and wanted Ubuntu to look like Windows 7/8/XP there are themes for that:

Feeling a bit nostalgic and want to go back to the Windows XP days there is a theme for that too. The good part you would still be running modern software which is secure and receve timely patches.

With Ubuntu you do not have to spend hours of your time hunting obscure forums for the most basic software. No need for torrents and patches because most of the software is totally free. The best part is that you get to experience the thrill of downloading from local Ubuntu mirrors with as much as 1 Gps bandwidth. Yo!Africa has maintained a local repository for ages now and ZOL recently launched an official mirror. With the ZOL mirror you do not even have to do anything, you just need to select Zimbabwe as your country. Let me let you in on a little secret: Ubuntu on a ZOL connection is awesome; you can get downloads in seconds at your rated speed which means that if you are on fibre you can get downloads at speeds near say 20Mbps.

You are probably sick of hearing  this but when you are on Linux (Ubuntu) most virus will not find you. In addition to this by forcing you to learn more about your computer Linux makes sure that you are a better administrator. Linux also gives you security by obscurity.

There are several versions of Ubuntu with low system requirements. For example the Lubuntu distro can be used on older machines. If your PC was good enough for XP then chances are that you can still install a modern form of Lubuntu on it.

You can install Ubuntu on a USB device and try it on your machine before you install it and commit your self to the FOSS path.

There are a lot of reasons to use Ubuntu, before you succumb to that FUD that is always going rounds on the internet you would be best advised to try it first and make your own decisions.

20 thoughts on “You could do with Ubuntu and Wine”