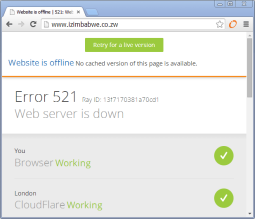 Recently, we noticed that the Umuntu Media founder, Johan Nel, has moved to Gumtree South Africa (an eBay owned company). Umuntu, if you remember, is the company behind iZimbabwe.co.zw, iZambia, iNamibia and other such news portals. What the startup is known for most is raising US $1 million in 2011 to do country portals that had local news, a local business directory, classifieds, jobs and other such. Portals like iZimbabwe.

After noticing the founder had left Umuntu, we checked iZimbabwe and found its down. So are the other 4 portals we knew of; iZambia.co.zw, iNamibia.co.na, iAngola.co.ao and iBotswana.co.bw. They all give off that CloudFlare error page below. We have no idea when the sites went offline; could be weeks, months, or even over a year. 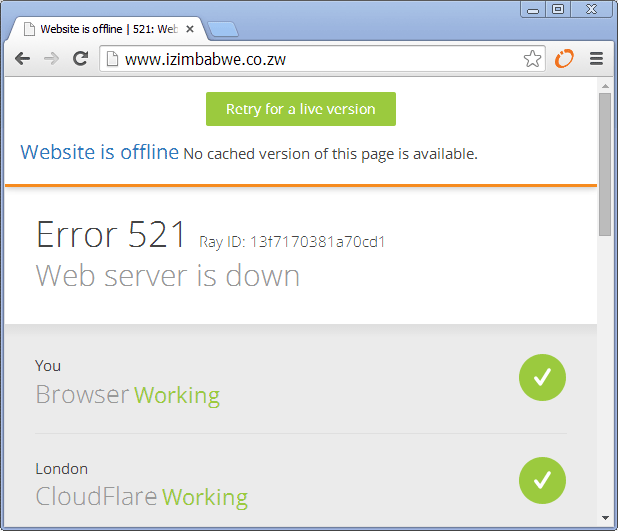 To be fair, Umuntu wasn’t exactly focusing on the i portals anymore. Their attention over the past 2 or so years has really been a product called Mimiboard, which we wrote about here back in 2012. Mimiboard itself had broken functionality when we check it out yesterday, and today it’s giving off errors too.

Johan Nel hasn’t yet commented on this, but Brian Hirman, Founder and Investment Director at eVA Fund (where the $1 million dollars came from) told us this:

The status is that we are now in the finalizing stage of the transformation of Mimiboard as we know it today to a completely new platform which combines the basic thoughts of Mimiboard and the portals like iZambia into one integrated platform.

Although Johan Nel is currently active for eBay, as founder of Umuntu Media he still is involved in this process as member of the Umuntu Media board.

It’s not clear who will now head Umuntu Media, Who we knew as number 2 at the company, an operations manager, also left the startup to join another company in South Africa. In fact Umuntu’s own website, www.umuntumedia.com, is down too. You’d think everyone has moved on, but Hirman says not.

Whatever the status or reasons, it’s great they gave it a shot, and it’s great that someone believed in them and the idea enough to put some money into it. We should have more of that in Africa.

2 thoughts on “Umuntu shuts down iZimbabwe and others like it. Founder leaves for Gumtree”