Here’s something that every local music fan who isn’t living under a rock knows by now – Global superstar John Legend will be performing in Zimbabwe on the 19th of November 2014 as part of his “All of Me” Tour.

If you are not acquainted with his music or simply are not a fan this is probably not a big deal, but the rate at which tickets are selling out shows how the artist, (or his show at least) is already causing a sensation months before the event. 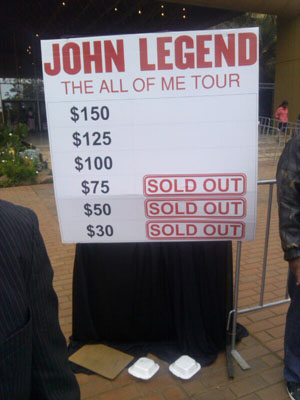 Tickets to the show were made available for online reservation on Sunday the 29th of June with the actual sales (offline unfortunately) starting today at 2pm at the HICC. Not surprisingly by 2pm today the cheaper tickets ($30, $50 and $75) had already been sold out. This leaves anyone keen on going with the option for the $100, $125 and $150 ticket options.

John Legend fans clearly do not want to be left out of another international artist’s concert as was the case with Bryan Adams. Or perhaps some “enterprising zimbos ” want to make hay while the sun shines and keep stock of tickets whose value will go up in value.

I applaud the way the organisers Davies Events (also the organisers behind the Bryan Adams show) have managed to use a simple tech solution to solve a common problem.Online reservations are a great option, especially when you consider how they give out of town fans a chance at getting tickets. Besides leveling the playing field the promoter has a good perspective on how popular a show will be.

However an option to buy tickets online would have been fabulous. With e-payments options now available through PayPal, Paynow, Pay4App and the m-commerce platforms there is no reason why i shouldn’t pay for my ticket from home instead of reserving it and having to go pick it up at the HICC box office.

Without the presence of players like Computicket or any other online ticketing provider this is a huge opportunity for anyone who can present the solution. A lot of services will benefit immensely from this. Just consider how the local soccer league is trying to introduce such a system to catch up with the rest of the digital world.

If you are a fan and still want go to the show the only option still available is offline. Better make your way to the HICC before the remaining tickets are sold out.