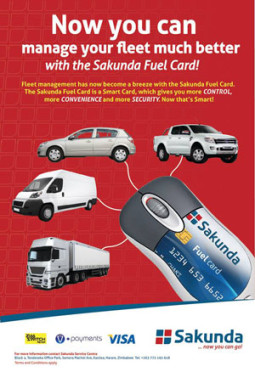 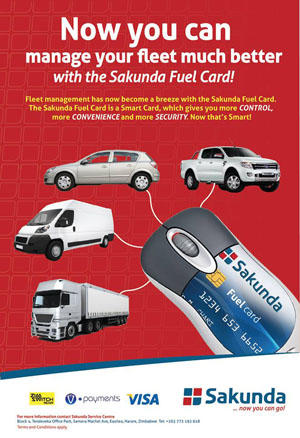 Most of us remember coupons fondly as the easily tradable pseudo-currency from the pre-dollarisation era.

Well, local fuel distributor Sakunda Energy has taken a step into the digital age and done away with the coupons with the introduction of their Sakunda Fuel Card.

The petroleum concern stopped selling coupons some time ago and has been advising holders of coupons to redeem them and have the fuel credited to a new Fuel Card.

So what’s the Fuel card all about? It offers holders the option to electronically buy fuel that is then credited to their account. The fuel can then be redeemed at any Sakunda station. It also acts as a loyalty card.

To get a card you have to sign up as a user which can be done via an online registration process. or at the Sakunda Offices. The card can then be collected from the Sakunda Offices (Currently Century Towers Harare but moving to Tendeseka Park next week). Out of town users will have their cards sent to Sakunda service stations in their town.

At the service station you have to present your card which requires secure PIN access to redeem your fuel.  The card works both online and offline with the online payments possible at any time. The Fuel Card can also be used by companies which allows for multiple card distribution and monitoring of purchases which includes details on the amount redeemed and the service station.

Currently the options available for online purchase are VISA, Zimswitch and VPayments allowing you to purchase fuel from any part of the world.  According to a representative from Sakunda there will be an integration with mobile payment options in the card’s second phase which is a few months away.In this phase other add ons to the card will be made available.

Assuming we move away from this multi currency regime and resume Zim Dollar activity together with the return of a parallel market I wouldn’t be surprised if the VISA facility is used to push fuel as a pseudo currency.

It goes without saying that e-payments for something as crucial as fuel is a step in the right direction for Sakunda. This is one aspect that all service providers need to consider in a dry economy that now has e-commerce options. While the Fuel Card is yet to integrate with mobile money it is still a great e-commerce option for fuel.