Just recently we reported that Zimbabwe’s leading carrier, Econet, launched a new service that allowed its subscribers one month access to the micro-blogging site Twitter for free. Now days into it, I’ve been second guessing my vocabulary, prowling the internet trying to look up what “free” actually means because since I’ve been using this service it’s been anything but free.

One step forward, two steps back

This is where I’m coming from. I joined Twitter close to three years ago, a year after I joined Facebook. In all these years I’ve grown to be a Twimbo through and through. Even when I stopped using Facebook two years ago, Twitter still remained my daily driver up to this very day.

Like any other Tweep I was more than amped to hear that Econet had finally brought a Twitter service, and a free one at that. Sadly that excitement fell flat just hours of using “free Twitter”.

I found that by using this “free” service I was actually eating up my balance, so I contacted Econet with the problem. In response I was advised that rebooting my phone would obviate the problem but that didn’t work. I brought that to their attention and they requested my number and device model. In a few minutes I was told to try again. That too didn’t work. 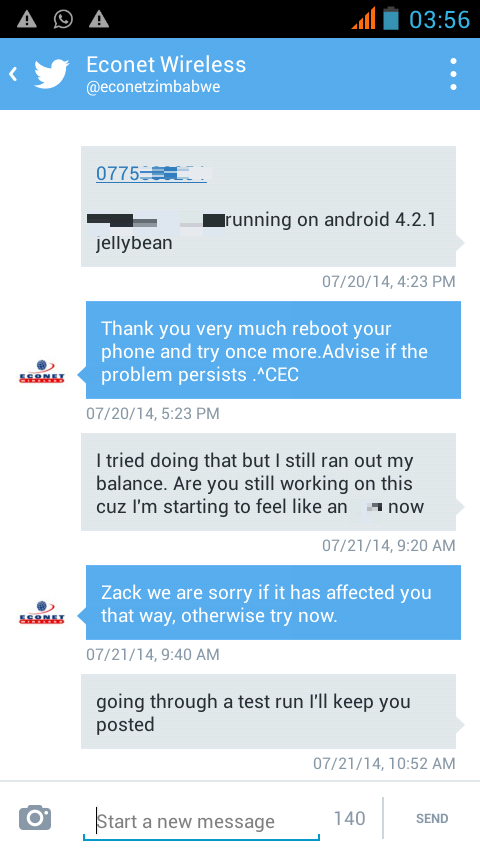 This didn’t sit too well with me. I couldn’t help but think : “Is it because my phone is jacked up?” I switched to a different phone and tried again but this only reaffirmed my fears that the problem wasn’t really my phone.

I donned my trusty fedora and set out on a field research. It didn’t take much to discover that a number of people were coming up with the same problems and they were also being treated to the same solution that I was having troubles with.

Now $3 into it, I gave another shot at notifying Econet and all I got back was “Our apologies, we have notified the responsible department for further investigation”. That was it. I didn’t really expect this from Econet, maybe from the competition they try so hard to take a few shots at.

I can’t wrap my head around why I still can’t connect to “free Twitter” and just how many have fallen victim to this flaw. I don’t know if it’s ever going to happen since this service will only be running for a month. A big “go figure” right there. Problems are easier to deal with if they are shared so I guess they’ll be some relief if I go #tellsomeone.

What have been your own experiences with the one month free Twitter service? You can share in the comments below.

13 thoughts on “My two cents on Econet’s “free” Twitter”