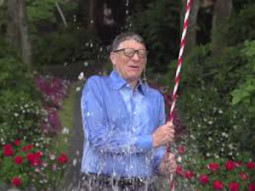 There’s no way you could have missed it. Unless you don’t use the Internet at all. It seems like everyone with a social media presence, (the craze is celeb driven actually) is doing it and In the process raising an awareness of a neurodegenerative disease. I’m referring to the Ice Bucket Challenge.

The idea of the challenge is pretty simple – Participants, having been nominated by a previous participant, are supposed to film themselves pouring a bucket of ice water on themselves within 24 hours of being challenged.

After this they get to nominate three more people to take the challenge. If they fail to engage in the chilly cause they must donate to an ALS (Amyotrophic Lateral Sclerosis) charity.

Let’s face it, this social media storm has been a huge success. In the past fortnight more people have gotten to know, ask and talk about ALS/ Lou Gehrig’s disease. A lot of funds dedicated to the cause have trickled into the right coffers and globally a lot of people following personalities in fields as varied as sports, entertainment, politics and tech business have ended up googling Lou Gehrig.

The Ice Bucket Challenge represents what is the latest in “clicktivism” or “Hash tag activism”. Social media and modern digital tools are demonstrating how they are highly effective in raising the awareness of plights and causes normally restricted to small communities.

Thanks to how the internet is an open platform, an effectively crafted campaign can be spread to every part of the world, particularly if it is carried by the right catalysts of online and traditional media.

Before we were schooled in the plight of ALS we had causes like No Make Up Selfies and Bring Back Our Girls. What comes next is going to depend on how the cause can strike a chord in the hearts of the right groups in the digital community who will help transform a viral craze into global sensation.

So why haven’t we seen any Zimbabweans rallying behind this cause, despite having a keen interest in video crazes? (Zvinhu Zvirikufaya comes to mind) Granted that it’s a bit of a challenge for the average urban dweller to playfully pour a bucket of water over themselves, iced at that. (Ask ZESA and ZINWA why)

It could be how a lot of people feel that there are other causes larger than ALS we should be rallying behind locally, and here in Africa as well. Perhaps a challenge for Ebola would have struck a different chord? Or fundraising for flood victims or the homeless and disadvantaged.

In any case the ice bucket challenge has demonstrated how the internet and social media are providing a new approach to raising awareness and funding to a global audience that might be willing to show its support with a shared video or picture and the click of the button.

10 thoughts on “What can Zimbabwe learn from the ice bucket challenge?”