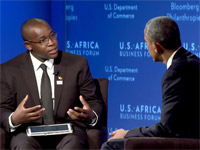 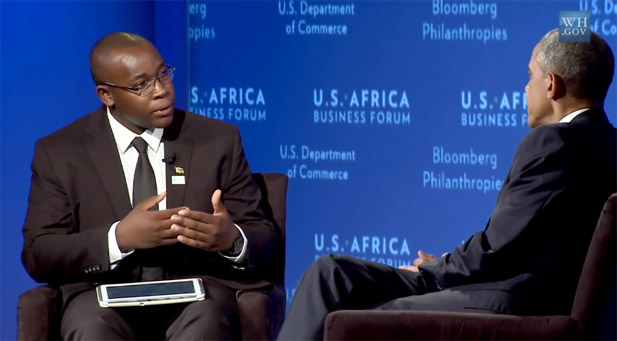 In a rare one on one stage interview he held with US president Barack Obama, Zimbabwean technology entrepreneur, Takunda Chingonzo, told Obama that the supposedly target sanctions against some political leaders in Zimbabwe were actually hurting ordinary people. Chingonzo said technology entrepreneurs looking to get technology or funding from US based companies often get hit a brick wall because of the sanctions.

“In our work we got to a point where we needed to import a bit of technology from the United States. And so we were engaging in conversation with these US based businesses, and the response we got time and time again was that unfortunately we cannot do business with you because you are from Zimbabwe. I was shocked. This doesn’t make sense.” explained Chingonzo to Obama.

In response, Obama said that the US is facing the challenge of balancing helping the people of Zimbabwe with what what he termed ‘repeated violation of basic democratic practices and human rights’ in the country.

Obama agreed with Chingonzo that was was needed initiatives that enhance as opposed to retard the progress of the Zimbabwean people. The US president then suggested that projects be explored by Zimbabwean entrepreneurs together with the US to ensure Zimbabweans are not affected. He was adamant however that the US is set on sending the strong message about good governance in Zimbabwe.

Takunda Chingonzo in the US on the Young African Leaders programme. The founder wireless internet startup, Saisai, which we covered here some weeks ago, he had the one on one with Obama on stage yesterday at the U.S.-Africa Leaders Summit in the US.

Whether anything comes out of his promise or not is ofcourse something else. He is after all a politician and he had to have a response. It is however that great that Chingonzo was able to articulate something that many people believe not to be true – that in supposedly targeting a couple of politicians with sanctions, the US actually doesn’t hurt politicians but ordinary people that just want to do business.

In the interview Chingonzo and Obama also discussed issues of net neutrality as well as access to funding for small business in Africa especially as at the summit investment pledges by US companies seemed to target large established companies and governments.

Here’s a video of the stage interview. The video starts with Obama’s speech and the interview actually starts around 18 minutes.

You can view the full transcript of the interview here.