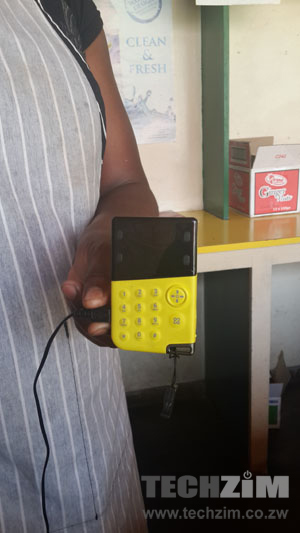 Here’s something interesting that I spotted while paying for lunch at an eatery in Harare – the cashier was handling payments through a card based system that works through a tapping mechanism. No, it wasn’t the EcoCash Mastercard or telecash Goldcard.

It turns out its an NFC enabled “tap and go” system that works with cards synced with Econet’s EcoCash wallet.  Instead of the conventional card swiping, going through a string of USSD commands or using an EcoCash app, a simple tap deducts the amount owed from a user’s EcoWallet.

This clearly has more relevance to the Zimbabwean market than the new Apple Pay system that relies on credit card details (not so widespread in Zimbabwe) and oh yes, an iPhone.

From the little information I managed to get from the cashier who was handling transactions using this NFC system, so far only a few Econet employees have been using the cards. The product hasn’t been released for the general public so it seems this just a test site for what will be Zimbabwe’s first mobile money NFC payment system.

This sort of product, though a first for the Zimbabwean market, is hardly new. In May 2013 Google and Equity Bank collaborated to introduce the exact same product, called Beba Pay, for use on buses in Nairobi.

The Beba Pay card is offered for free to commuters at different bus stops and the card can be credited at agents or through the phone. Part of its function includes an SMS receipt for transactions. Perhaps Econet wants to take the same approach for kombis  in the same way they introduced EcoCash for public transport payments?

Beba Pay has a free app that transforms NFC enabled phones into card readers. This has helped in the adoption of the tech among various retailers and particularly SMEs, a strategy which will most likely be adopted by Econet through its agents and merchant network.

How you think this “tap and go” NFC system will fare in the local market? Will it be huge relief for payment inefficiencies in retailing and public transport?