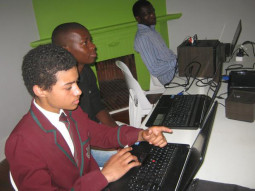 Hour of Code of Zimbabwe finally became a reality a couple of days ago thanks to the efforts of a group of techies that decided to get our country involved.

Today marks its third day and the lessons in basic programming will be conducted at the Hypercube Hub in Harare where people keen in learning how to code have been coming in.

According to Sheima Muguza, the lead coordinator of Hour of Code Zimbabwe, the first two days have been fairly successful, with attendance being driven largely by children who seemed to show more interest in learning the new skill.

On day two more people tricked in even after the session had ended, including some participants from the first day who were dropping in for a second lesson.

Hour of Code is open to all age groups though, so there were some grown ups who passed through and went through their first hour of basic programming. The hope is that more adults who have never been involved in tech but want an insight into programming will take it up.

It’s not a Harare-only thing though. On Thursday (tomorrow) the focus will shift to Bindura where the lessons will be conducted at the Bindura University from 10 to 11 am.

Interestingly, a small community in the small town of Glendale have also organised their own Hour of Code event scheduled for Thursday as well. Like the other hour long events this is just a group of people in that community that decided to take part and have reached out to the organisers of the Hour of Code Zimbabwe team to find out how to make this happen.

It’s not too late to sign up to be part of this initiative and people (and communities) are still being encouraged to jump in. If you are still keen on being a part of this week long Computer Science drive, you can get the details of the Hour Of Code Zimbabwe team here.