A shout out to the Zimbabwe Cricket team for their victory over the UAE at the Cricket World Cup. National pride is sweeter these days where one story is retold a million times on the internet.

Like a lot of other unlucky cricket fans, I didn’t get a chance to watch the match and will definitely miss out on a huge part of the Cricket World Cup.  You can blame this on screenings that aren’t conducive with work/life schedules, not having the right MultiChoice bouquet or how ZBC is not stepping up to screen the only world cup tournament we actually compete in.

This leaves the internet as the primary source of information and content on the tournament. Fortunately, a lot of platforms have been very forward when it comes to keeping us up to date with everything going on at the World Cup. It’s what has become the mainstay of social media when it comes to global sports events and tournaments.

This time around, Twitter has created an Explore Cricket World Cup feature along with the hashtag #CWC2015 for the tourney. This is meant to provide anyone using the social platform with the best and latest info on what is happening in New Zealand. 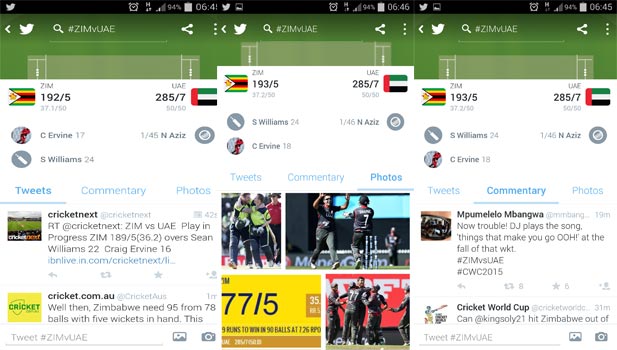 As you can expect cricket fans who use Twitter are thrilled at the opportunity to keep track of all the goings on at the World Cup. This Twitter campaign has a very practical purpose and the very rapid nature of Twitter makes it the best social media platform to do this.

For some Zimbabweans that have free access to Twitter, it’s also a very convenient, affordable and reliable information and highlights centre. It’s value becomes even more apparent when you realise that there isn’t any single official Zimbabwean news platform that is churning out the latest information on the World Cup, our national team and how it is performing there.

Opportunities lie where digital media and the business of sports collide

Just like the FIFA World Cup Twitter Timeline which was targeted at the huge following the micro-blogging site has in Brazil, Twitter isn’t embracing cricket just for the love of the game. The move is driven by the strong following it commands in India.

An article from Forbes quotes statistics from Twitter India that show how the country has a rapid growth in user numbers. With 89% of the country’s Twitter users being cricket fans and the cult following the sport has there, moves such as the setup of a Twitter Research centre in India and this Explore Cricket World Cup feature make social media and business sense.

We won’t see the same Twitter campaign targeted at Zimbabwe, but a continent-wide campaign for football (Africa’s biggest sporting passion, think Afcon) on a platform like Facebook (which is the leading social media platform here) wouldn’t be surprising.

2 thoughts on “What’s up with Twitter and its fascination with the Cricket World Cup?”