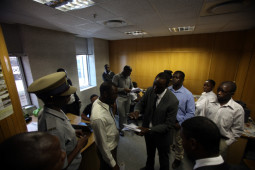 Information we have so far suggests that the raid on a Zimbabwean based online publication, The Source, is about getting a journalists to reveal their sources.

On the issue of journalists revealing the sources, Section 61 (2) of the Constitution of Zimbabwean guarantees this:

Every person is entitled to freedom of the media, which freedom includes protection of the confidentiality of the journalists’ sources of information

To break down what happened, here’s a quick summary of events:

2 February: The Source publishes an article titled “Debt-distressed Zimbabwe moves to reschedule domestic debt” in which it says the government has resorted to domestic borrowing and that Steward Bank, an Econet Wireless subsidiary holds US $30 million in government treasury bills, a deal brokered by Steward Bank former owner, Tawanda Nyambirai. Econet confirms to The Source that Steward Bank indeed holds government treasury bills and that Nyambirai was involved in structuring the deal. Today’s raid on The Source resulted in them complying to take down the article, but the internet doesn’t forget so you can find a cached version here.

2 March: The Source breaks a story titled “Steward Bank seeks land to settle $2,1mln Chiyangwa loan” in which it says the bank is considering recovery of a loan issued to Phillip Chiyangwa‘s company during the TN days, by swapping with residential stands to the tune of $2,1 million. (Cached version of the article is here)

16 March: Econet and Steward Bank obtain a High Court order to have the stories published by The Source withdrawn and conduct a search and seize operation at The Source.

20 March: The Source, challenges the High Court order granted to Econet Wireless and Steward Bank to have the online publication withdraw some of the stories it published on its site. It cites constitutional media freedoms violation.

26 March: Econet lawyers, Executives and IT people accompanied by The Sheriff and Police, raid The Source’s offices and succeed in having the stories taken down as well as going through the emails of the journalists. According to our sources, they copied emails and documents off these laptops.

The case that resulted in the order to search and seize is apparently that The Source stole documents, but if this were the case of The Source stealing by means of accessing the premises of Econet or Steward Bank, then the case would be about theft and not about taking stories down.

From what we observe from the facts in the media and industry, The Source simply had great sources who provided them information and that the constitution protects journalists from being forced to reveal all the information they have or to hand over their source.

The raid is about trying to find out what the journalists know and where they got the information. Obviously, we’re not constitutional experts and we can only comment based on how we understand it.

What is even more worrying is that by accessing the journalists’ laptops and copying documents, Econet and the police have accessed a lot of private information on many other stories and sources that do not concern them.

It’s important to note that Econet is not disputing the accuracy of the articles. They even commented in one of them. They clearly just don’t want this information in the public and apparently are infuriated that a publication was able to access the information.

We have reached out to both Econet Wireless and Steward Bank but we have not received any response yet.

24 thoughts on “Econet, Steward & the raid on The Source: Is this a violation of the Constitution?”