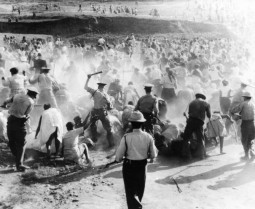 To those of us who, as a result of the sacrifices made by others, are blissfully unaware, Saturday 21 March 2015, yes this past Saturday, was the International Day for the Elimination of Racial Discrimination.

It is a puzzling paradox that today’s generation, especially blacks, despite having all the information a mere Google search away have nothing but apathy when it comes to their history and struggle for universal suffrage.

On this day in 1960, 69 (including 10 children) people lost their lives when an oppressive white supremacist regime opened fire on a group of about 6000 black people who had come to hand themselves over to the police protesting against the discriminatory apartheid system.

Most were shot in the back while fleeing. Although it is hardly ever mentioned, it was the technology of the time, that allowed the pictures of this brutal massacre to be shown all over the world. It marked a turning point as people started seeing the South African apartheid regime for what they really were despite their assertions that they ran a “separate but equal system.”

In as much as black people stood up to themselves, it is the increasing rise in the use of technologies such as cameras, video cameras, TVs and radios that broadcast moving moments like Luther King Jnr’s world famous “I have a dream speech” or Nelson Mandela’s ” I am prepared to die” that spurred the pace of much-needed change and aided black people in obtaining equal rights and gave the oppressors a pause as they feared their heinous acts would be revealed.

This is to be contrasted with pre-1945 examples before most of the communication technologies available today were still yet to be widely adopted. A situation that allowed people like Adolf Hitler to murder over 6 million Jews in the space of 4 years during the Holocaust with no one the wiser.

The 21st Century racist now has the internet to content with. A technology that has proven to be a formidable force to reckon with. With developments such as smartphones, a would be racist in today’s world is a moment away from ruin.

All it takes is a witness recording the misdeed, uploading it to any of the social media platforms like Twitter or Instagram using the proper hashtag, and the perpetrator will be dodging cameras from CNN and BBC the next minute as their name forever becomes tainted with infamy.

Technology will allow such simple acts to bring even institutionalized acts of racism that have thrived undisturbed to the attention of the world. For example for years black people I have talked to have always complained of how white Americans have racially mistreated them in one way or another a fact which was often met with staunch denials by the leadership who have for so long touted themselves as the front leaders when it came to racial equality.

The myth has however since been debunked with live news coverage, Tweets, Blog news articles, Facebook posts, Instagram photos of multiple racists events all over the US. A common case has been racial profiling, where the police and law enforcement often pay a disproportionate amount of attention to black people and constantly search and harass them for just being black.

In places like Ferguson where a white police force in a mostly black town constantly penalized, arrested and imprisoned black people based on flimsy reasons the perpetrators were exposed after a lot of activism on countless 24 news hour cycles, blogs and social media forums.

A few weeks ago University of Oklahoma students of the Sigma Alpha Epsilon fraternity, a fraternity with a long history of drug peddling, racist, and anti-Semitic views were exposed, and either expelled or withdrew in a matter of hours after they were caught on video and which was quickly posted on the internet performing one of their racist chants which has been taught to members for decades but had thus far been kept from exposure. There are numerous such examples of incidents from the both the US and the world over.

Closer to home in South Africa, the “Rainbow Nation”, numerous acts of racism have been exposed in present years especially in workplaces and campuses where it seems it has been to some extent allowed to thrive.

For example a few years ago a video showed white students at Free State University in Bloemfontein (a predominantly white neighborhood) tricking black workers at the institution to drink a stew laced with urine in an act that was probably racially motivated.

These and many other numerous acts exposed by today’s selfie generation that clearly vindicate what other people who have visited the nation have said about race relations.

On a more positive note students from the University of Cape Town (UCT), students have been effectively utilizing social media to organise protest marches against the continual display of a Cecil John Rhodes statue which is prominently featured at the University.

They have created a “Rhodes Must Fall” page on Facebook that has garnered a lot of likes and caused much talk South of the Limpopo as people ask themselves why they should continue to honour an unrepentant racist who wished for our continual subjugation.

In the 21st century, the Negro is now freer that he has been since slavery and Luther’s days but in some places racism is still alive and well. Technology not only allows us to expose it wherever and whenever it occurs, but it allows us to show solidarity with those who are oppressed by racists and to stand together in condemnation.

Take a pause and in commemoration of this great day find an online race related cause, like their page, retweet their tweet, re-share their post or sign their petition to show solidarity and make it known to the perpetrators that the world does not approve of racial oppression.