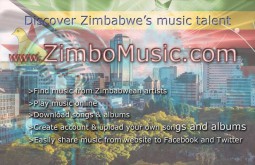 I still don’t get how tech and music ended up having such a weird relationship, but as a fan of music I don’t need to really.

The music industry has a very complicated relationship with technology. On the one hand, it is butchered by piracy and the countless avenues that have been created by it through the internet. On the other, it leans on the same sword to grow its visibility and create a footprint in a world where being offline doesn’t make sense for anyone creating content.

There are some guys that try to read into all of this and draw something out of it. One local music startup, ZImboMusic, is trying to do that, in its own way.

Some of you might remember ZImbomusic as one of the runners-up from the 2014 ZOL Startup Challenge. But that was in November last year, so we followed up on the team from Bulawayo to find out what they have been up to.

This startup, Zimbomusic.com, is an online platform for the promotion and distribution of local music from artists and producers still trying to develop a presence in music. Rather than have each new artist, with limited resources, try to build a digital brand on their own, ZimboMusic assumes that role and leverages on social media as well as offline promotional strategies.

According to Makhosini Mpofu, the team lead at ZimboMusic, their startup has registered some success in the past few months. The metric they have been using has been the promotion of a bigger roster of artists, something that has helped ZImboMusic gain attention from fans following these upcoming artists.

When I visited the website I couldn’t identify any of the artists listed there. I’m not plugged into underground gospel or urban grooves, but I guess its testimony of the work that ZimboMusic is doing. At the same time, the exposure of the artists and developing mainstream appeal is what Zimbomusic should be doing.

Mpofu says that they have managed to do that as evidenced by the promotion of new artists like Ricco Andrews, who went on to perform at South African superstar, Casper Nyovest’s show, as well as through rotation of music on local radio and TV.

So where is the money in all of this? ZimboMusic has been drawing revenue from advertising on the site. That hasn’t been enough though, so the team has put its hand into the promotion of music shows.

Although the sale of music sounds like a no-brainer for such a service, Mpofu says that their experience with digital content distribution has shown that it could be very challenging. That’s not to say they won’t explore it as a supporting stream though. The Zimbomusic app is one of their medium term objectives and it will have some paid downloads.

A lot of the work around digital music distribution is still at an experimental stage and with the way piracy has been a nightmare for every producer, sometimes anything that involves paying for content seems like Mission Impossible. In any case, it still is commendable that some startups like ZimboMusic are figuring out what works and what doesn’t for the Zimbabwean music space.

3 thoughts on “Almost half a year later, what’s the latest with local startup ZimboMusic?”