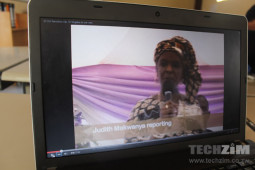 Just like with all the country’s failing parastatals things are not well at the state broadcaster, ZBC. The latest audit report from the firm KPMG just provides formal proof of what we have long since known.

With ZBC we have a poorly run institution that is overstaffed (what do they need 962 employees for), has a corrupt board which gobbled up over $25 million dollars while others went unpaid, and it counted Cuthbert Dube as its Chairman (seriously how many jobs does this guy have, it seems parastatals cannot do without him). We also need competing broadcasters to take them on.

The report is strangely mum on what to do with this irresponsible board, or maybe it mentions what to do with them somewhere. It’s not like it (the report) was made available to the public. This is just one of the many things wrong with the way ZBC is being run; lack of transparency. Things are often shrouded in mystery and no one knows the exact financial position of the public broadcaster.

This is despite the fact that the law requires them to publish audited financial statements at least once annually and no later than six months after the end of each financial year. Most parastatals do not bother and ZBC has been no exception. In a country where the law is partially applied especially when it comes to government-owned institutions why should they?

The report also recommends that the current licence model be scrapped and instead be replaced with a subscription model. The auditors proposed a fee of $3/month be levied on subscribers to access the two channels.

You see, for its DStv service, MultiChoice charges $10 for 27 channels which translates to 37 cents per channel as part of its lowest priced bouquet and its decoders are selling for around $22 around town. Not only would its service be cheaper but it gives me the option to upgrade to higher priced packages if I can afford it. Leaving me to ask why would I pay $3 so that I can listen to some political party’s jingles and partisan news?

According to KPMG, using this model, the licence fees which currently bring in about $5 million in revenue per year will be eclipsed by the subscription model’s revenue of $15 million dollars per year.

I am not privy to the assumptions made, but I totally disagree with the figures. The introduction of set-top boxes (even though it should be done for the sake of progress) is going to see people leaving the state broadcaster in droves especially if they have the option of not buying the boxes.

For the past decade and a half ZBC has done a good job of alienating the middle class who constitute the major spenders of this country with their politically partisan programming so I do not see anyone in their right mind paying $3 a month just so they can listen to ZBC.

KPMG also recommends that the signal handling part of ZBC should be transferred into the hands of a technical entity like Transmedia and the state broadcaster left to concentrate with content creation and production. The transfer will allow the technical company to create a conditional access system like the one used by DStv so that only those who pay can access the service. ZBC will have to compete with other broadcasters on the airwaves and people would only pay for the channels that they want to access.

Well, this is all noble and high-sounding like all the reports and white papers the government creates, but it is hard to see this happening in practice. So far the government has not been amenable to the idea of private broadcasters riding the airwaves and instead it has granted itself (under nom de guerres like Zimpapers or Deputy Minister of Information) the sole right to the airwaves.

And oh, in a possible show of how the law is selectively applied while Telecel is being hounded for not complying with its licence requirements it would both ZiFM and StarFM are flouting theirs too. What is going to happen to them?

This act provides for the taking over of broadcasting activities from ZBC and handing them over to a signal carrier company which would transform the technology from analogue to digital. This carrier would also provide internet, web development  and e-commerce services to the whole country, satellite broadcasting services, a state of the art production studio and a T.V. subscription service.

Transmedia is that company. Yet 14 years later it is yet to be handed over ZBC broadcasting equipment, assets and liabilities as the law requires because of a loophole in the law which says the Act will take effect upon the “commencement date” which is yet to be determined I suppose.

Following the KPMG report to the letter will no doubt lead to at least some improvements at ZBC even though I still think the revenue forecast from $5 million to $15 million was made under the influence of psychedelic drugs.The report however misses four critical points:

Despite the many scandalous revelations about how the boards at most of the country’s parastatals are more interested in inordinate salaries and benefits without delivering anything, the government has done nothing substantive to improve the controls and corporate governance at these institutions.

Case in point. The Auditor-General only released the 2012 audited financial statements report in 2014 and we are still waiting for the other reports! In it, he mentions, belatedly how most boards at parastatals are improperly constituted and sometimes understaffed and yet overpaid; 2 years after the fact.

How can the parliament and those tasked with control of these institutions act when they do not even have the necessary information to make decisions? ZBC like other parastatals should provide formal and audited financial statements and reports in a timely manner as the law requires. Laws are not worth much if they are not enforced equally.

Government should stop doling out bail outs to failing parastatals, not when they are not accounting for how they are spending the money. Parastatals, ZBC included, should pay their licence fees like any other entity otherwise the result is an uneven playing field, lax financial policies like the ones places like NetOne, ZBC and ZESA who are constantly making losses and begging for loans.

ZBC should stop the politics
If we are being honest the state broadcaster these days is nothing but the government’s mouth piece. They churn out supportive messages based on political affiliations without even the least pretext of impartiality as vitriolic insults like “sell-outs” are liberally dished out.

There is little to no impartial useful business or informational news with most programs seen through the lenses of political lenses. This has alienated the station especially when it comes to the middle class who form the economic backbone of this country. Sure the rural population might like the state broadcaster’s programming but their opinion does not mean much economic wise.

Add to that the outdated and ancient content that is repeated and the poor picture quality during the HD era. You are left wondering whether those who would stick with ZBC’s services when there are options available are in full possession of their faculties.

ZBC should take a leaf from other state broadcasters like the SABC, CCTV and the BBC. It should air high quality and useful information in an impartial way without resorting to partisan rhetoric otherwise even if they go digital people are going to shun it unless of course if they make it a compulsory part of every bouquet they sell.

We are sick of the local content only mantra

These bouquets will only appeal to people if they provide people with variable entertainment especially Hollywood, Bollywood and other foreign productions. There is only so much content that we can watch without getting sick of it. Subjecting people to poorly scripted and cheap locally productions is not going to accomplish anything.

It does not matter who gets the licences as long as they provide these things then all will be well. Otherwise adopting the currently proposed changes will just be another chapter in the disaster at ZBC.