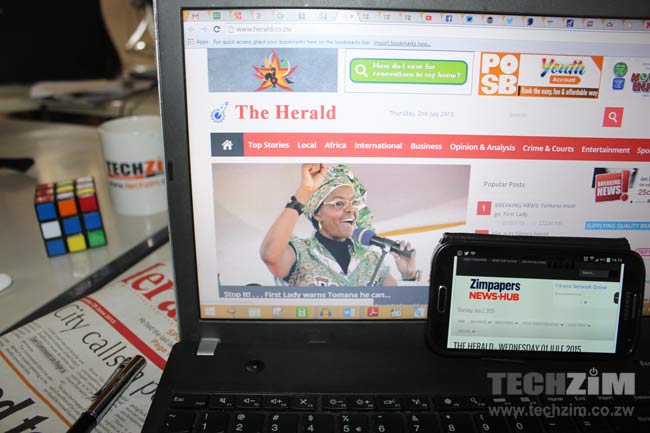 Recently we were trying to figure out how local publishing house, Alpha Media had developed a strategy in a digital environment which has a declining consumption of the traditional press print reads. Alpha Media has been addressing this with its apps.

The trends over the past couple of years have been pretty clear. Its not just Alpha Media that is leaning on digital.  Zimpapers, the country’s largest print media house has been slowly transforming itself to maximise on the use of ICT while acknowledging the fact that digital channels are becoming more and more popular by the day.

According to its financial results, Zimpapers’ strides into selling mobile content has scored some some successes with digital media contributing some 3% to their annual revenue. In a statement published in The Herald from Pikirayi Dekete, the Zimpapers Group CEO, the company’s emphasis on digital is deliberate and it has resulted in all their print newspapers being available online.

Some addition to its online presence has included business and sports centred platforms in the form of BH24 and Sports Zone, a news portal for all their publications in one place as Zimpapers news hub, radio stations that include Star FM and the soon to be launched Diamond FM in Mutare. Zimpapers is also making plans to set up a television station.

There are concerted efforts to also offer market segmented localised distribution of news, a strategy that will see areas receiving content that is relevant to their demographic areas. We are not sure whether this will only affect mobile news subscribers or it will mean the launch of community radio stations.

Where is Zimpapers making cents?

Just as with the Alpha Media the business model, we tried to find out how the revenue model works following Zimpapers recent announcement of its half year financial results. Apparently its mobile platform, an Econet based SMS and MMS platform for receiving breaking news and classifieds, is a healthy source of non-funded income.

Breaking news can be subscribed to by simply sending an REGBN to short code 34445 and Classifieds by SMSing REGCA to the same number. The prices range from 25 cents to 87 cents depending on the particular content.

The service has some 300,000 subscribers, a wholesome number when it comes to revenue.  At 25 cents a week, Zimpapers can realise up to $300,000 a month from efforts that may require a single laptop and an internet connection.

Zimpapers may have found the formula after all but deliberately choosing to leave the mobile applications route in favour of good old SMS which is probably bought for song from Econet considering SMS is “dying” as a delivery channel. Right there is a good strategy for a startup to contemplate.

A comparison of Zimpapers and Alpha Media group will most likely point to higher numbers for Zimpapers as their service is offered via Econet compared to the later whose platform is Telecel. Undoubtedly, both are enjoying a stream of revenue from heavily discounted rates for SMS.

Is the business of news going digital completely? That’s a long winding debate with many perspectives and half truths as well as inconsistencies from either side of the debate. But numbers don’t lie, and so far, Zimpapers is making a good bit of change from the digital space.

Do you use the Zimpapers SMS or online platforms over print news versions? Share your experience with us.